Female Flies Do Chores After Sex

After a quick round of raunchy fly sex, the female fruit fly doesn’t want to cuddle, and she doesn’t want to sleep. No, the only thing this chica wants to do is some fly chores. And it’s not because she wants to, it’s because there’s a special enzyme in the male fruit fly’s sperm that compels her to do so.

Professor Elwyn Isaac from the University of Leeds made this discovery after comparing the sleeping patterns of virgin fruit flies and mated female flies. Typically, flies forage around rotting food at dawn and dusk. They then take a nice afternoon nap and catch a deep sleep a night. However, mated females ditched the siesta and spent their post-copulation time foraging in rotting food for suitable places to lay eggs. “Our research findings suggest that this change is not by choice.” says Isaac. “Females who mated with males that produced sperm without the sex peptide continued to take their siesta. So we’re certain that this change of behavior is chemically induced by the male.”

The sex peptide is attached to the end of the sperm’s tail and also encourages the female to lay 100 eggs a day, as compared to the 1-2 eggs laid by a virgin female. Although preventing the female from taking her afternoon nap increases her chances of being eaten for lunch, it also increases the chances that the male will have successful paternity. Talk about marital compromises. 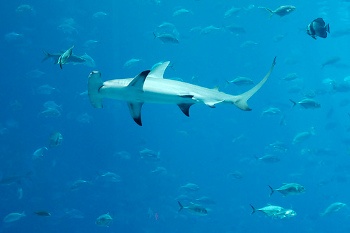 So, besides looking really badass, what is the reason for the strange layout of the hammerhead shark’s head? The general consensus has been that the sharks could not have binocular vision because their eyes are stuck on either side of their head, but that they probably have excellent depth perception. It’s been widely claimed that they have the best eyesight of any other shark, but this theory had not actually been tested, until now.

A team led by Stephen Kajiura and Timothy Tricas tested hammerhead sharks to see how wide their field of view was and if they had binocular vision. They collected specimens with heads ranging from narrow to wide, and swept a light in horizontal and vertical arcs around each of their eyes. They recorded each eye’s electrical activity, which would show if the shark’s eyes were reacting to the light. They found that scalloped hammerheads had the largest visual field, followed by the bonnethead, blacknose and lemon sharks. Next, they plotted the visual fields of both eyes on a chart to see if they overlapped, which would indicate that the sharks possessed binocular vision. Amazingly, they did overlap, proving that, despite how far apart their eyes are, they are still used together. Even more impressive, because of their stereo rear view, hammerhead sharks have a nearly 360 degree view of the ocean world.

However, because of how far apart their eyes are, hammerhead sharks do have a blind spot – directly in front of their heads. So, if you see one coming at you, try to maneuver yourself appropriately to not be spotted. That, or have a tank of gas and rifle handy. 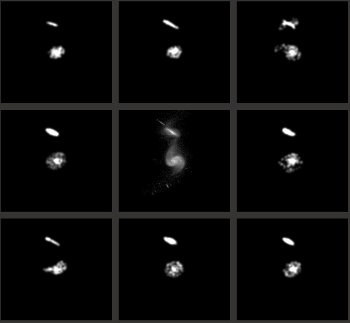 Matching multiple pictures of cosmic collisions can be a long and thankless job. There are hundreds of thousands of galaxies in our universe alone, and matching all the photographs is a daunting task, and that’s why astronomers want your help.

Using a website called Galaxy Zoo Mergers, users can play a game that closely resembles a Vegas slot machine, except instead of bars and pictures of fruit, there are photographs of galaxies and your job is to select amongst eight random images and see which one matches the cosmic collision in the middle. These photographs are taken from the Sloan Sky Digital Survey, an ambitious project which captured images of nearly 930,000 galaxies and 120,000 quasars. Studying these galactic mergers will help astronomers determine how galaxies form, and why they form in the certain shapes they do.

And how exactly does matching pictures of colliding galaxies help out astronomers? As researcher Chris Lintott puts it: “By randomly cycling through the millions of simulated possibilities and selecting only the very best matches, they are helping to build up a profile of what kinds of factors are necessary to create the galaxies we see in the universe around us – and hopefully, having fun, too.”

In the past two years, over 250,000 users have played this cosmic slot machine and helped to classify many of the hundreds of thousands of galaxies captured on the site; some classifications have resulted in published research papers. 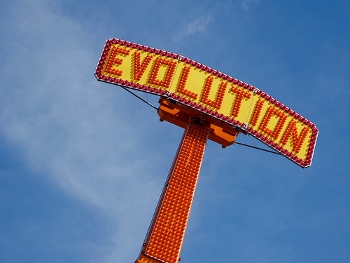 Are humans still evolving, and if so how? Four different theories give vastly different predictions as to where the human race is heading.

The first prediction claims that human evolution is no longer occurring. Anthropologist, Ian Tattersall, says that “Because we have evolved, it’s natural to imagine we will continue to do so, but I think that’s wrong.”

According to Darwin’s theory, evolution occurs when a mutation causes a benefit in a population, and is thus passed down throughout generations. However, this generally only happens in small, isolated populations. Because the human population is neither small nor isolated, and in fact crossbreeds quite regularly, meaningful evolution cannot occur.

Further, the credo of “survival of the fittest,” no longer holds any bearing since medical advances have made it so that the weak do not necessarily perish. Everybody stays alive and passes on their genetic material, which essentially cancels out the processes of natural selection.

“In this situation, the fixation of any meaningful evolutionary novelties in the human population is highly improbable,” Tattersall says. “Human beings are just going to have to learn to live with themselves as they are.”

The second prediction claims that humans are still evolving, and will continue to do so.

According to evolutionary biologist Stephen Stearns, “There is this idea that because medicine has been so good at reducing mortality rates, that means that natural selection is no longer operating in humans.”

However, his team has found that human evolution is occurring on nearly the same rate as other living things. Stearn and his team analyzed the data from a 60 year study on North American women, concentrating on identifying traits which are important to human health. These traits affected the number of children the women had over their lifetime; measuring these effects allowed the researchers to make short-term predictions about how each trait will further evolve.

Further, sexual selection is still alive and well. Women and men alike are still able to choose the traits they prefer in a mate; the more powerful, the better. With constant, consistent advances in technology occurring, this sexual selection will become stronger, because ” the more advanced the technology gets, the greater an effect general intelligence will have on each individual’s economic and social success, because as technology gets more complex, you need more intelligence to master it,” claims Geoffrey Miller, an evolutionary psychologist. “That intelligence results in higher earnings, social status and sexual attractiveness.” Hmm, looks like nerds will rule the world, after all. 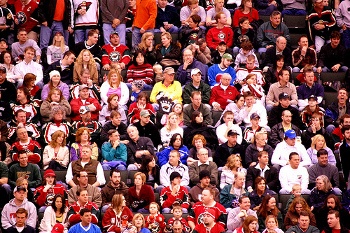 Further, what with all the advances in genetics and artificial insemination, parents now have more control over their child’s genetics than ever before. From discovering which genes are linked to which traits, to literally choosing the exact sperm and egg produce a child, humans are on the path to being able to “create” the exact kind of child they want, creating a new kind of “natural” selection.

According to Miller, “You will probably see a rise in average physical attractiveness and health. You will probably get selection for physical traits that tend to be attractive in both males and females – things like height, muscularity, energy levels.”

“Regular” natural selection will still have a role, as Miller believes that the pool of viruses and bacteria is going to increase, resulting in more epidemics. These epidemics will select for those with stronger immune systems.

The third prediction states that transhumanism will allow humans to take control of their own evolution. Darwinian evolution happens very slowly, but the future is in the quick forms of evolution – genetic enhancements, cloning, nanotechnology, and so forth. It’s essentially humans being in control of their own evolution – there will always be the random, slow-paced evolution available, but transhumanists believe that the future is in transcending those biological limitations.

Transhumanism suggests many possibilities, such as uploading one’s mind into a computer, then downloading it into anything- robot, toaster, penguin. Once this is a possibility, “evolutionary selection could occur in a population of uploads of artificial intelligence just as much as it could in a population of biological organisms,” says Nick Bostrom, director of the Future of Humanity Institute. “In fact, it might operate much faster there, because artificial intellects could reproduce much faster.”

The last prediction claims that a new era of evolution lies in the stars, and beyond. Essentially, a small, isolated group of humans that headed to a new habitable planet could jump-start a new version of Darwinian evolution, with a completely new set of environmental and biological factors. “If we had spacefaring people who went on one-way voyages to distant stars, that might be enough to trigger speciation,” explains John Hawks, an anthropologist from the University of Wisconsin-Madison, “but, if you think about it, a small group of people went on a one-way voyage to [The Americas] 14,000 years ago, and then when new people [Europeans] showed up 500 years ago, they were still the same species.”

Are we still evolving? Are new forms of evolution possible?