Robin Would Have Failed a Face Detection System

Those folks hoping to don a face mask and become an incognito firm hand of justice a la Green Lantern or Ms. Marvel should take the following research into consideration: Some masks are just more effective than others, due to the parts of the face they obscure or alter.

Adam Harvey, a designer and technologist at NYU’s Interactive Telecommunications Program, has been anticipating the day when smartphones will be able to pick out and identify random faces on the street, subway or ComicCon using face detection software. Using reverse engineered algorithms, Harvey has created a few blocky images that have successfully subverted current face detection technology. He’s pinpointed the patterns which cause face-detection technologies to fumble, and they’re surprisingly simple.

For instance, a fake beard may be a decent façade in a spy flick, but apparently wouldn’t hold up against a robust face detection system. Ditto goes for the Robin-style domino mask and eye makeup. What does work, however, are masks or makeup specifically around the eye region, mostly alternating patterns or asymmetrical stylings. 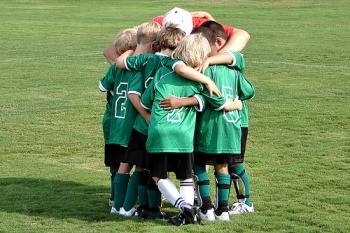 Want to Be a Leader? Stay Close to the Edge

Common sense seems to dictate that if you want to be the one in charge, you’d naturally want to be the center of attention. However, new research indicates that those stationed at the edge of crowds tend to have more authority.

Groups of eight students were asked to walk around an area and remain a group without speaking or gesticulating. In some groups, one person was secretly designated the “leader” of the group, meaning they would decide where the group would head to next. In other groups, no official leader was appointed. Every group was told simply to “follow the leader.”

Researchers found that leaders who remained on the edges of the groups managed to move their entire group more effectively than leaders who were in the center of the group. “We wanted to find out how people decided who to follow,” explains Lead Researcher Jolyon Faria. “We found that people were able to identify their leader by what position the leader takes, which goes some way to explain how animals in groups, such as birds and fish, can be led by only a small minority, even when leaders don’t signal their identity.”

I can’t help but wonder if the experiment was a bit flawed. It seems reasonable to think that leaders at the edge of a moving crowd would have more range of movement than a person in the center and surrounded on all sides. Though the leader in a center of a group may be visible by more people in the group, they certainly don’t have the range of motion of someone located on the edges. 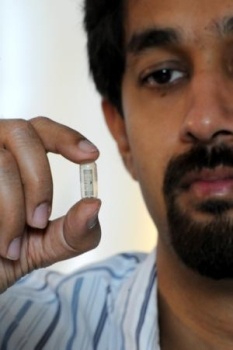 New Pill Lets Doctors Know If You Take Your Medicine

Engineers at the University of Florida have designed a new kind of pill. Along with the drug your doctor prescribes to you, it will also include a mini microchip and antenna which would allow your doctor to see if you are actually taking your medicine.

Here are some hard statistics: Those suffering from chronic diseases only take about half of their pills. Ten percent of hospital admissions are from patients not taking their medication, resulting in 218,000 deaths each year. Further, even those who elect to take a medication – say, for a clinical trial – can sometimes forget or flat out refuse to swallow it. (Granted, if a trial medication is turning you into some hairy Sasquatch clone, I’d opt out, too).

The slightly over-sized pill has silver lines printed onto it, which make up the antenna. The microchip is inside along with the actual medicine, and is about the size of the period at the end of this sentence. All of it is nontoxic and is meant to dissolve from stomach acid after being swallowed.

Before it is digested, however, it communicates to the second part of the system, a wrist device that could eventually be integrated into a watch or bracelet. The device signals a cell phone or laptop that the pill has been swallowed, allowing doctors and loved ones to check in on their patient. 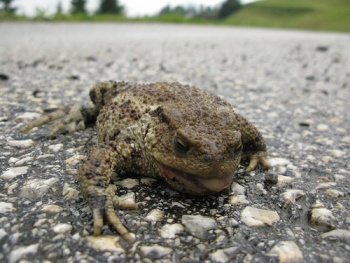 If all frogs have abandoned your beat, you may want to behoove their silent advice. Frogs have now joined the ranks of birds, rodents and other beasties that can sense when an earthquake is coming and hightail it to a safer area.

During a study of common toads in Italy, biologist Rachel Grant noticed something odd: They had begun to disappear from the site for apparently no reason. 96 percent of the males had disappeared, and the total population had fallen to zero just three days before the reason become clear. In April 2009, an earthquake hit near the town of L’Aquila. Though Grant was at first frustrated with the toads’ disappearance, the earthquake suddenly made everything clear

“Our findings suggest that toads are able to detect pre-seismic cues, such as the release of gases and charged particles, and use these as a form of earthquake early warning system,” explains Grant.

The chances of ongoing research and an earthquake lining up are rare, and most “animal warning systems” have relied on simple hearsay. Reports of animal abandonment and subsequent earthquakes has happened since 373 BCE, when historians noted that rats, snakes and weasels left Helice just a few days before a major earthquake.