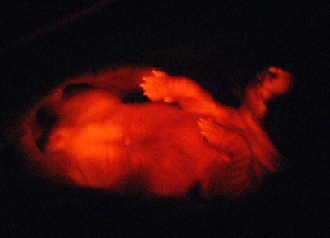 In a blatant attempt to force squeals from teen girls around the world, scientists in South Korea have cloned puppies that glow red under ultraviolet light.

More than a simple trick of the light, the puppies’ luminescence is a result of their transgenic nature. The scientists used a retrovirus to insert a biofluorescent gene into the dogs’ genetic structure during the course of their normal gestation — or, as close to “normal” as a cloned baby beagle gets.

Of the 344 embryos altered and implanted into adult female dogs, seven resulted in pregnancy. One pregnancy ended in miscarriage, while another pup died of pneumonia after birth, leaving the team with five glowing bundles of joy.

Obviously this method of crafting extra-adorable pups isn’t exactly efficient, but it serves as further proof of concept of mankind’s burgeoning ability to directly target and alter genes within living organisms.

Ideally this sort of technology will eventually serve to prevent the likelihood of hereditary illness, but if Hollywood has taught me anything, we’ll probably all be killed by transgenic supersoldiers long before then.