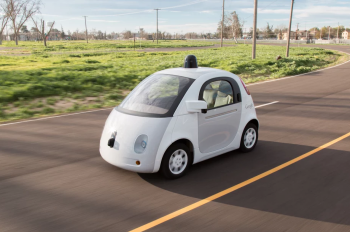 A new study reveals that replacing personal cars with a fleet of electric taxis – much like Google’s – is a cheap way of cutting down greenhouse gases.

With Google and Uber each working on driverless cars, many are now wondering if computers should take over everyone’s steering wheel. Not only do these cars have a fantastic safety record compared to human drivers, it turns out they drastically cut down on vehicular greenhouse gases. According to the Lawrence Berkeley National Lab in California, if Google’s fleet of autonomous taxis replaced our current, personal cars, we’d see a 90 percent drop in greenhouse gas emissions – not to mention a near 100 percent decrease in oil consumption – all while saving money for consumers.

Of course the biggest reason for this change is self-driving cars are electric – dropping gas guzzlers will lower gas emissions no matter how you break it down. But what really surprised scientists was that this system was green and highly cost-effective. “You don’t often find that, where the cheapest is also the greenest,” study co-author Jeff Greenblatt explained.

The trick is that electric taxis serve a large population without everyone needing a personal car. Instead of limiting the system to Google employees traveling to work, a fleet about 15 percent the size of private vehicles could take us all to our jobs and return to shared charging stations when the battery is low. Even if we’re generous and estimate such cars cost $150,000, they operate 24 hours a day, have no gasoline costs, and don’t require a salary like traditional taxi driers. That saves money in the long run, plus IHS predicts models will be much cheaper by 2030 – only $5000 more than current gas-powered models.

That’s not to say there aren’t hurdles to overcome with such a system. Driverless cars would have to be efficiently scheduled to meet everyone’s needs, and account for variances between short and long-distance road trips. But the good news is Americans aren’t against driverless cars on principle – one study suggested 44 percent would consider buying a self-driving car in the next 10 years. Even if we don’t go with the taxi route, that’s very promising for the environment and our wallets.

The Oscar-Winning Movies That Cause Big, Manly Tears