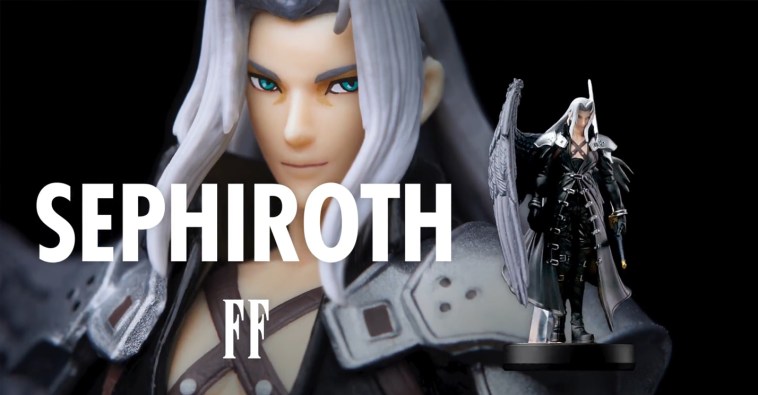 Nintendo has shared a new teaser video showcasing Super Smash Bros Ultimate amiibo for DLC fighters Sephiroth, Kazuya, Pyra, and Mythra, along with release date info. Sephiroth and Kazuya amiibo have an official release date of January 13, 2023, while Pyra and Mythra will follow sometime later in the year. All of these characters appeared in Super Smash Bros Ultimate as part of Fighters Pass Vol 2, the second wave of DLC characters and stages. The only character in the bunch without an officially announced amiibo right now is Sora from Kingdom Hearts.

Super Smash Bros. #amiibo for DLC fighters Kazuya and Sephiroth will be released on 1/13/23.

Plus, look forward to the release of Pyra and Mythra in 2023! pic.twitter.com/6HEuGR07Nv

Of all the characters who joined the game as DLC, Sephiroth from Final Fantasy VII might have had the most unique entrance. He was available to purchase and download as usual, but he was also available to download a few days early if you could beat him in a one-on-one “boss fight.” Although, Kazuya from Tekken had a rather dramatic entrance as well. Memes were made out of Kazuya tossing countless characters, Smash or otherwise, off a cliff.

Pyra and Mythra hail from Nintendo and Monolith Soft’s Xenoblade Chronicles 2 and actually joined Super Smash Bros Ultimate before Kazuya did, but perhaps something about the duo is taking them longer to manufacture than is the case with Kazuya. Regardless, it sounds like we can look forward to 2023 being the grand finale of Smash amiibo — with or without Sora.