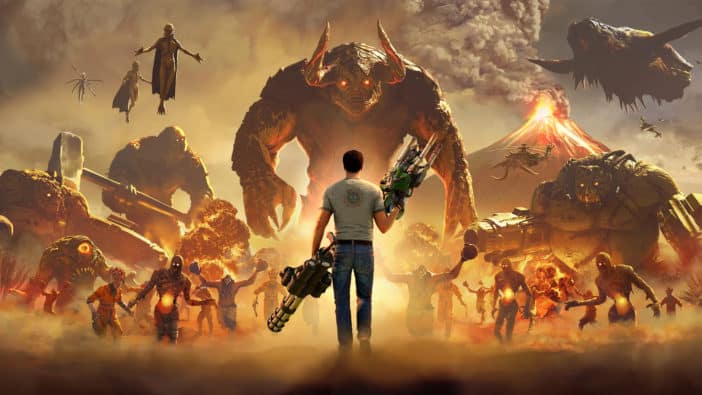 Publisher Devolver Digital and developer Croteam have announced that Serious Sam 4: Planet Badass is coming to PC via Steam and Google Stadia in August 2020.

Devolver Digital has posted several videos detailing different aspects of the game, titled “Serious Battles,” “Serious Enemies,” “Serious Weapons,” “Serious Music,” and “Legion System.” In particular, Serious Sam 4‘s Legion system allows for hordes of enemies to be on screen at once. Graphics engineer Dean Sekulic mentioned that the team was originally hoping for about 10,000 enemies to appear on the screen, but they were pleasantly surprised when they were able to increase it a magnitude more.

Additionally, 4-player online co-op is available during the campaign, and players can tackle sidequests. Extra modified difficulty modes will also be included.

Serious Sam 4: Planet Badass is available for preorder now on Steam for $39.99. The Deluxe Edition will run for $49.99 and comes with a digital artbook, original soundtrack in both MP3 and lossless formats, and an exclusive in-game weapon skin for the Classic Tommy Gun. The skin is also a preorder bonus for any edition of the game.

The game was first announced back in 2018 with only a Steam release confirmed. A Devolver Digital representative told Kotaku that Serious Sam 4: Planet Badass will arrive on PlayStation 4 and Xbox One in 2021. Right now on Steam, every title in the Serious Sam franchise is on sale for up to 90% off.