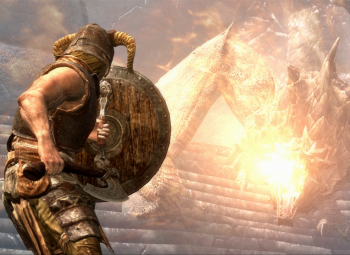 The ESRB thinks intense violence, getting drunk, and references to rape and sex slaves is “mature content.” Go figure.

The Entertainment Software Ratings Board has released its advisory verdict on The Elder Scrolls V: Skyrim, awarding it an M for “Mature.” As with any ESRB report, game details are mostly vague (unlike in the video demo Bethesda recently released), but its always fun to read people referring to gore, torture, and sexual innuendo so matter-of-factly.

“As players engage in melee-style combat, some sequences are highlighted by slow-motion effects, particularly for decapitations,” the official report reads. “Large blood-splatter effects also occur during combat, and some environments are stained with blood or body parts (e.g., heads impaled on spikes). Some sequences allow players to injure/kill non-adversary characters, including prisoners chained to a wall; they scream in pain amid splashes of blood or fire.”

It then continues: “As the game progresses, the dialogue and on-screen text contains references to sexual material (e.g., “. . . all the whores your heart, or any other organ, desires,” “She . . . raped the men as cruelly as Bal had ravished her,” and “Remember when you thought [he] was . . . intent on making you . . . into his personal sex slave?”).”

Some of you may remember that the previous Elder Scrolls game, Oblivion, had a bit of a run in with the ratings board some five years ago. While the ESRB had initially rated the game T, some nudie mod skins soon caused it to overturn its initial decision and demand that Bethesda re-label new and existing Oblivion game boxes with an M. While nudity isn’t currently listed as a deciding factor for Oblivion or Skyrim, the decision to award the latter a Mature rating from the get-go this time seems to stem primarily from a simple “intense” upgrade in violence.

Here is the short summary for the two games from the ESRB official website for a comparison of what’s changed:

It seems like we can expect more of the same, except for fewer naughty words and an extra helping of brain splatter.

The ESRB is bit like the MPAA ratings board in so much as nothing it says is legally enforceable or relevant. That curmudgeonly Target cashier manning aisle nine might still try to card you when buying something rated R or M, but that’s a matter of company policy, not a national one. That being said, I’m sure there’s some stock in the ESRB’s claims that parents often use its ratings when deciding which games are most appropriate for little Timmy (though somehow, every twelve-year-old on the planet still magically has a copy of Grand Theft Auto). For adult gamers, however, early ESRB ratings are generally followed for one reason: A small preview of what we can expect.