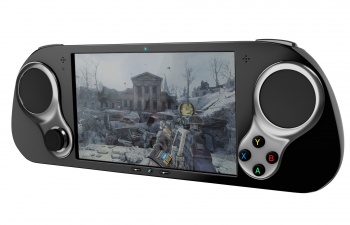 The Smach Z Kickstarter has been cancelled to address backer concerns before launching a new campaign.

Update: Despite a strong campaign opening, the SMACH Z team has taken down its Kickstarter to address various concerns. The team describes various concerns in a new update, ranging from slowed progression, to producing a demo prototype, to strong demand for a Windows-based SMACH Z. It also promises that a new SMACH Z Kickstarter will be launched once those issues are addressed.

“This campaign has meant a lot of good stuff to us,” it reads. “It let us see that lots of people are interested in SMACH Z. From loyal backers to people that shared the campaign through social media. We’ve received great feedback and we have seen people becoming authentic spreaders of their love for SMACH Z. It means that there’s a market for this product. Our intention is to keep going and launch a new improved campaign … to make sure that we can reach our goal!”

Original Story: If you’re the kind of gamer who wishes you could play your Steam library on the go, odds are you’re pretty interested in the SMACH Z. Originally announced last year as the “SteamBoy”, this device promised to be the first handheld Steam Machine, offering the ability to play over 1000 SteamOS games without being tied to pesky cords. Sadly, after a few delays and renamings we still haven’t had the chance to play it for ourselves. But perhaps we’re nearing the final stretch – the development team has unveiled a new Kickstarter campaign to create the SMACH Z’s consumer edition.

As a Steam Machine, the SMACH Z will have full access to any Linux game available in Steam, a list which includes Half-Life 2, Portal 2, Civilization V, BioShock Infinite, and many more. Since our last post, the team has upgraded its screen and internal memory to better support current games. The SMACH Z will come with a Steam Controller-styled layout, but can be fitted with optional adapters if you prefer physical controls over its touchpads. The current specs for the basic model are listed below:

The Kickstarter also doubles as the SMACH Z’s pre-order campaign, offering the device in a variety of colors. It also unveils the PRO edition, with more robust hardware and an attached camera. It also unveils unique features of the SMACH Z’s controls – while it comes with a Steam Controller trackpad, you can clip a traditional D-Pad to replicate a traditional console setup.