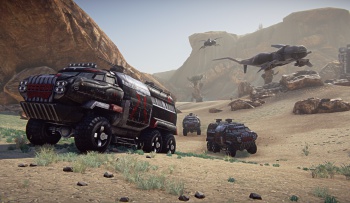 Even users running benign apps will be banned from the game, including deletion of characters and items.

To prevent cheating, Sony Online Entertainment has posted an announcement on their forums informing users of Planetside 2 that modifications to the game’s client will result in a ban from gameplay resulting in loss of characters and items. Further, applications that simply modify Windows or Directx can result in suspensions unless they are specifically exempted by SOE. “We cannot make exceptions to this,” said a representative of SOE, “if we allowed [harmless apps] they would simply be used as a shield excuse by players trying to cheat.” A clarification posted several days later outlined some apps that are allowed. “Mumble, Teamspeak, Fraps, and of course Steam, which all use overlays, are expressly allowed. Having an overlay to display information to the user not related to Planetside 2 itself is fine.”

It’s a very unforgiving policy, and will probably result in a few bans of people running safe apps, but SOE is avoiding cheaters at all costs: “The most simple guidance here is do not use third party programs which change the Planetside 2 gameplay in any way unless it has been specifically cleared by SOE.” Well reasoned arguments aside, an app bare, modless world is a pretty strange one in contemporary MMOs – where the standard for some time was the “mod-what-you-want” user interface of World of Warcraft. It may be a matter of context, as a First Person Shooter, Planetside 2 relies on a more competitive atmosphere than World of Warcraft and MMORPGs, but it’s an interesting move away from openness and customizability for the freemium world.