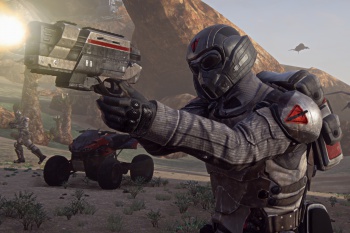 Could Sony be prepared to bring two free-to-play shooters to the PS3?

Sony Online Entertainment recent free-to-play FPS release, Planetside 2, may not officially be headed to the PS3 quite yet, but the company certainly isn’t publicly ruling it out. In speaking with the Official Playstation Magazine, SOE President John Smedley reveals some interesting statistics regarding the company’s titles, and drops a hint at what is in store for the future.

“SOE has proven we can bring our games to the PS3. 70% of [DC Universe Online] revenue comes from PS3,” Smedley explains. And when asked whether Planetside 2 could end up on Sony’s home console, he answers in a predictably cryptic manner. “What I’d say is – SOE has proven that we can bring our games to the PS3, and it’s fair to say that we’ve got some other stuff out there cooking. I can’t tell you what platforms it’s for, but we’re really excited about it.”

If the company’s latest title does indeed make a PlayStation debut, it wouldn’t exactly be surprising; Both Free Realms and DC Universe Online have already made the jump. Of course, bringing Planetside 2 to the console could cannibalize adoption of Dust 514, Sony’s other free-to-play shooter, which is currently in beta on PS3.