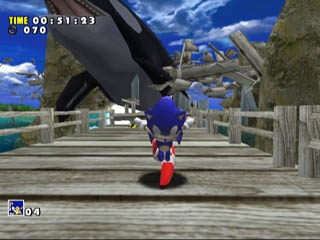 The Dreamcast might be long dead, but its games are making a big comeback starting with the re-release of Sonic Adventure.

Sonic Adventure, one of Sonic the Hedgehog’s first 3D excursions, was better received than its modern day 3D counterparts when first released on the Dreamcast in 1999. Today, the Dreamcast is but a dream itself, but Sega is repackaging its games for digital release, starting with Sonic Adventure on XBLA today (and PSN on the 21st).

But to be quite honest, Sonic Adventure on XBLA isn’t getting the best early reviews, as it seems to hold the same flaws of its Gamecube remake, Sonic Adventure DX (a “director’s cut”), which gamers didn’t like quite as much as the original. Still, it’s a piece of history, and if you want to check it out it’ll be up to you to decide if it’s a piece of anything else too.

A DLC pack is also available to convert the XBLA version of Sonic Adventure into the DX release, which includes additional missions and a playable Metal Sonic. The original game features multiple playable characters, but the best part is playing as good old Sonic when he has to escape from a marauding killer whale.

Whether Sonic Adventure will be enjoyed by people or not, a positive aspect of its release is that it heralds the beginning of what hopefully becomes a Dreamcast flood on modern machines. Crazy Taxi is already scheduled for future release, as are other unannounced Dreamcast titles according to Sega. The Dreamcast didn’t have the most amazing lineup of all time, but it did have a few gems like Shenmue and Power Stone that it would be nice to see again.

Activision Declines Use of In-Game Ads Out of “Respect”