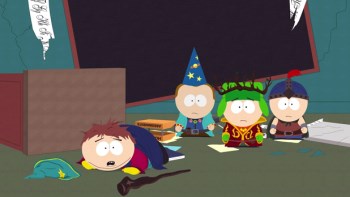 Update: Get Games is reporting that the PC version of the game will only be censored in Germany, Austria, Australia, Singapore, Hong Kong & Taiwan. All other countries, including the UK, will receive the uncensored version.

Original Story: Australia’s extremely tight video game censorship has become somewhat of a running joke – despite the introduction of an R 18+ rating, games like South Park: The Stick of Truth are still being censored for their Australian releases. However, it seems that in South Park‘s case, it isn’t just a matter of Aussies being prudes, as BT reports that the The European (including the UK), Middle Eastern and African (EMEA) releases of the game will feature the same censorship.

The following documentation was reportedly sent out along with review copies to outlets in the aforementioned territories:

“Seven scenes of about 20 seconds each are censored in the EMEA console versions of South Park: The Stick of Truth. The decision to cut this content from the game was made by Ubisoft EMEA.”

The scenes censored include:

According to the publisher, “each censored scene is replaced by an image background and a description text selected by [South Park creators] Matt [Stone] & Trey [Parker],” similar to how in the Australian version, the scenes are replaced with the image of a crying Koala.

It also appears that the censorship only applies to the Xbox 360 and PS3 versions, as the PC version will remain intact and uncensored.