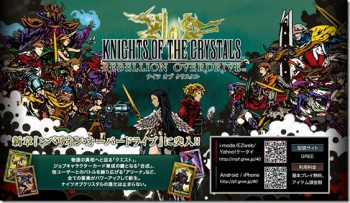 Square Enix’s “Rebellion Overdrive” isn’t the name of a new title like you were probably hoping for; it’s an upcoming episode for a social game.

Last week, Siliconera uncovered a new trademark, “Rebellion Overdrive” from Square Enix. The last time a trademark by the company was discovered like this, it was for “Sleeping Dogs”, which led to a lot of speculation about a new Kane & Lynch game (though it just was revealed that this wasn’t the case). Now, Square Enix has just revealed that “Rebellion Overdrive” is being used for its social game, Knights of the Crystals.

Siliconera posits the theory that Square Enix may intend to re-launch the game here in the West with all the updates from the Japanese version included, but the publisher is playing any future plans close to the vest.