If you’re upset that Star Wars nixed its expanded universe, what Disney did is nothing new in religious mythology.

Not long ago, in a place not too far away, a small group of thinkers brought a massive Expanded Universe to a close. Generations of fans who had grown up with its stories were told such tales no longer reflected any official narrative, and were provided with an official canon to replace it. The decision wasn’t welcome to everyone: many diverse writers had made impressive contributions to a growing cultural movement, taking root and inspiring loyal devotees from all walks of life. On the other hand, the Expanded Universe had become unwieldy, contradictory, and missed the point of the original tales that inspired it. New readers could be confused by the wide selection of stories, each varying in quality and tone, and come away with different impressions than other fans. Realizing that the franchise needed a controlled number of texts anyone could follow, the organization that managed this franchise trimmed all extraneous material and declared it as non-canon.

Some readers may think I’m referring to the Star Wars Expanded Universe, which Lucasfilm declared non-canon in preparation for Episode VII. And make no mistake, that was an incredibly disappointing decision to many. For decades, Lucasarts and its licensed affiliates produced hundreds of novels, comics, video games, and television episodes, taking great pains to unite them as a single storyline. For fans growing up in the 1990s, there was no difference between Star Wars on film and Star Wars in other media; everything came together to form the tale of a galaxy in constant flux. When Disney purchased the rights to Star Wars and announced that the EU non-canon, fans were outraged that the unified universe they imagined was being split in two.

But I’m not discussing Star Wars, at least not exclusively. I’m talking about Christian apocrypha, referring to documents that are “secret” or “not canonical”. Today, the term is most commonly applied to religious works that aren’t accepted as official scripture. Many major religions address apocrypha at some point in their history. Some, like the Hebrew faith, produced works that some considered superior to accepted scripture. Early Christians, on the other hand, produced dozens of books and gospels that were rejected from the New Testament Bible, and denounced many of them as heretical. The development of the Star Wars Expanded Universe isn’t so different, which can help explain the overwhelming fan loyalty, how contradictions are formed between creative voices, and why Disney’s decision to create a New EU isn’t so bad; in fact, it could have been far worse.

The important thing to remember about apocrypha, both for Christianity and Star Wars, is that neither started with a unified canon. Early Christian writings and beliefs could change wildly from community to community, since the church’s organizational structure wasn’t fully formalized until at least 90 CE. Despite the lack of oversight, Christianity underwent phenomenal growth during this period, spreading across the Roman Empire faster than church leaders were prepared for. Beliefs on the nature of Christ could vary between regions and cultural groups, be they Roman, Greek, Asian, or even Jewish-Christian. Religious texts proliferated as locals added to (or heavily rewrote) versions of gospels and apostolic teachings.

Star Wars‘ beginnings were no less chaotic. The Expanded Universe started, coincidentally, as a 1977-1986 Marvel Comics series produced with minimal oversight from Lucasarts. Outside of a ruling from George Lucas to avoid Darth Vader’s origins (obviously revoked after Episode I), Expanded Universe authors were free to explore any topic they desired. When the floodgates open, each EU writer fashioned their own Star Wars canon, sharing only the films as common ground. Marvel Comics designed original adventures and an extensive cast of secondary characters who would never be found elsewhere in the Expanded Universe. Spin-off novels and TV specials did the same, usually contradicting each other the same way early Christian scripture once did. Complicating matters was one simple fact: in 1980 George Lucas was still developing the original trilogy! Marvel linked its own series to The Empire Strikes Back and Return of the Jedi, but most content from this period was so inconsistent that it was retconned almost immediately (the Star Wars Holiday Special being a prime example).

Eventually, both organizations made a concerted effort to focus on a unified narrative anyone could follow. For Star Wars, this began with the 1991 novel Heir to the Empire, launching the Expanded Universe most readers are familiar with. Moving forward, each Star Wars novel, comic, and game storyline tied together, while editors ensured that new plotlines didn’t contradict previous volumes. Internally, Lucasarts established the Holocron, a database that ranked the canonicity of licensed products to ensure everything fit together. While Lucasarts always considered the Expanded Universe to be unofficial, editors exerted great effort to ensure fit everything together, even using religious language to make their points. 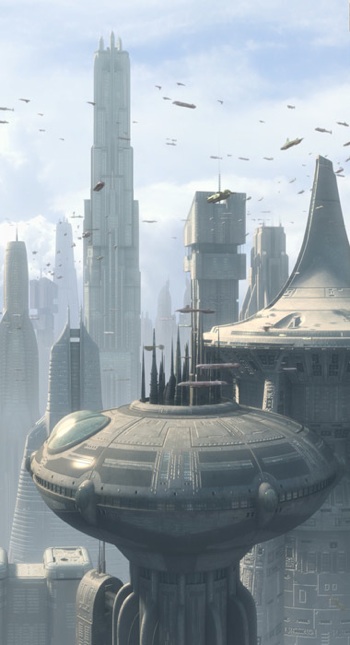 “Gospel, or canon as we refer to it, includes the screenplays, the films, the radio dramas and the novelizations,” read an interview with Lucas Licensing’s Sue Rostoni and Allan Kausch. “However, between us, we’ve read everything, and much of it is taken into account in the overall continuity. The entire catalog of published works comprises a vast history-with many off-shoots, variations and tangents-like any other well-developed mythology.”

“There’s three pillars of Star Wars,” George Lucas once explained, “the father, the son and the holy ghost. I’m the father, Howard Roffman [president of Lucas Licensing] is the son and the holy ghost is the fans, this kind of ethereal world of people coming up with all kinds of different ideas and histories. Now these three different pillars don’t always match, but the movies and TV shows are all under my control and they are consistent within themselves.”

Lucas himself held contradictory opinions towards Expanded Universe canon over the course of his career. On the one hand, he considered the Star Wars films as his complete story, and stated that he never would have accepted the direction the EU took. On the other hand, he occasionally drew content from the Expanded Universe when designing later films. The capital world of Coruscant first appeared in Heir to the Empire and was edited into later editions of Return of the Jedi. Boba Fett, the infamous bounty hunter from Episode V and VI, was actually created for the Star Wars Holiday Special. These contradictions were reflected in some interviews with Lucas, where he admitted to referencing EU material while still treating the films as his personal universe.

“I don’t know anything about that world [the EU],” Lucas said in 2005. “That’s a different world than my world. But I do try to keep it consistent. The way I do it now is they have a Star Wars Encyclopedia. So if I come up with a name or something else, I look it up and see if it has already been used. When I said [other writers] could make their own Star Wars stories, we decided that, like Star Trek [novels], we would have two universes: My universe and then this other one. They try to make their universe as consistent with mine as possible, but obviously they get enthusiastic and want to go off in other directions.”

By comparison, Christianity took a much longer period of time to lock down its official canon, a process that is difficult to fully summarize here. In short, the matter wasn’t broadly discussed until Marcion of Sinope published his own canon and declared, controversially, that the God of Isreal could not be the same God referred to by Jesus. The growing Orthodox church rejected Marcion’s claims and excommunicated him, but it prompted a centuries-long debate on which Christian texts should be considered canon. Various gospels were suggested as a central text, but in approximately 160 CE Irenaeus proposed four be considered canonical: Matthew, Mark, Luke, and John. A list of canonical texts was developed around these four gospels, eventually solidifying into the New Testament we know today by the 5th Century.

As Christian canon was established, apocryphal works slowly fell to the wayside. The gnostic gospels, several apocalyptic prophecies, and Jewish-Christian works that upheld Mosiac Law were treated as unofficial at best, and heretical at worst. Unlike Star Wars, these writings couldn’t be republished under a Legends brand. For centuries, the only way we knew these apocryphal texts existed was because of the sparse references and quotes from accepted Orthodox sources. It wasn’t until the discovery of the Nag Hammadi library in 1945 that scholars were able to study such books for themselves, many of which don’t seem nearly as controversial as some Orthodox thinkers once claimed.

Interestingly, one could even argue that the early Christian approach of suppressing everything but definitive canon was something George Lucas also believed in. On more than one occasion, Lucas expressed a desire to remove elements of Star Wars from public knowledge, ranging from the Star Wars Holiday Special to theatrical versions of the original trilogy. While his interactions with the Expanded Universe were limited, direct and complete control of the EU would probably have enraged fans just as much as Greedo shooting first. Fans may be disappointed that classic EU content was rendered unofficial, I expect they would prefer it over the historical precedent established hundreds of years ago; to have only one option made available for everyone.

While some only consider the films canon, and everything else a kind of semi-official fan fiction, Expanded Universe writing has evolved much in the same way that religious texts did 2000 years ago. The correlation certainly wasn’t intentional but it speaks broadly to how organizations develop pop culture mythologies, both spiritual and secular. As it stands, today’s Star Wars fans now have a unique opportunity to choose the mythology that appeals to them, be it Disney’s “official” scripture, or apocryphal texts crafted over the past two decades.

You don’t need to see Marshall Lemon’s identification, but you can follow him on Twitter @Marshall_Lemon. Move along.