Take to the skies with your old friend, R2-D2! 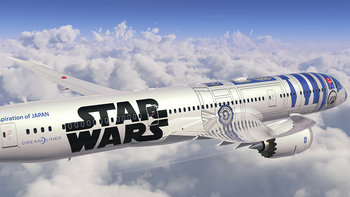 At long last, you could finally be flying with R2-D2! Japan’s All Nippon Airways (ANA) has unveiled plans to theme one of their airlines after everyone’s favorite astromech droid.

Yesterday, ANA announced that their newest airline, the 787-9 Dreamliner, will feature “Star Wars livery with the iconic R2-D2″ as part of a five-year project to “connect Japan to the global market.” Announced in tandem with the new trailer for Star Wars: The Force Awakens, the R2-D2 Jet is “the first time a Star Wars character will appear on the exterior of a commercial aircraft.”

Five years is a long time, but don’t worry! You’ll have a chance to fly with R2 in Autumn 2015. ANA flies to locations across the globe including Europe and North America, but does it really matter where you’re going as long as you have your trusty utility robot by your side?

Take a 360 degree look at the new R2-D2 Jet and start planning your seat assignment.