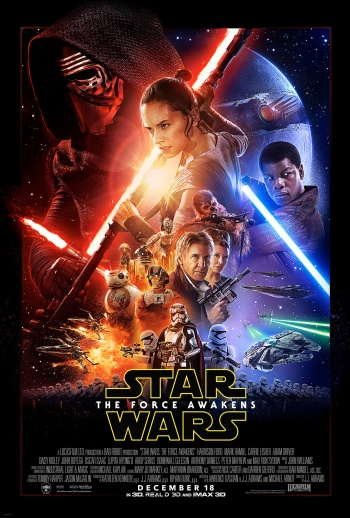 The entire Star Wars franchise is now worth more than Harry Potter and James Bond combined – not to mention countries like Jordan.

Everyone knew Star Wars: The Force Awakens would be a box office smash hit, bringing in more cash than the summer blockbuster Jurassic World. But we long ago passed the point where we could fully grasp Star Wars‘ monetary value – it’s just steadily increasing numbers at this point. So let’s talk finances: The entire Star Wars franchise was recently valued at $41.979 billion. For context, that’s more than Harry Potter and James Bond combined, not to mention the GDP of Jordan and Paraguay.

To be clear, this figure obviously goes well beyond The Force Awakens. Its opening week earned roughly $517 million, which is impressive, but that’s like dumping a bucket of water on Kamino. (The combined Star Wars box office totals, including the animated Clone Wars film, was $7.3 billion.) On the other hand, this is still Force Awakens‘ first week, and it’s a major contender for knocking Avatar from its box office podium. That box office figure could get much larger in the coming months.

The lion’s shares of these finances come from Star Wars‘ varied merchandise and properties. Home entertainment sales are over $5 billion. Video games like Battlefront, Disney Infinity 3.0, and classics such as X-Wing Alliance add another $4 billion. Then you have TV shows like Rebels and Clone Wars, not to mention the endless tabletop products from Fantasy Flight Games. As always, the lion’s share of revenue comes from toys – currently valued at a staggering $17 billion.

Put it all together, and you have an estimated value exceeding the GDP of Jordan ($35.8 billion) and Paraguay ($30.9 billion). Star Wars also towers over Harry Potter and James Bond, which have a combined value of $33 billion. The only way those movie franchises could surpass it is by throwing in Twilight and Lord of the Rings, and even then just barely.

In other words, Star Wars hasn’t been the lucky underdog pilot for a long time – it’s an Empire with enough money to build its own Death Star. And with new Star Wars movies coming out every year, for better or worse, that’s not going to change anytime soon.

Source: The Telegraph, via Fortune

Crows’ Tool Use Is Highly Impressive, a Little Spooky