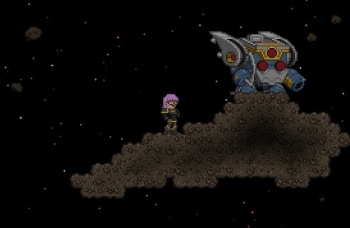 Chucklefish has some big plans in store for Starbound.

Starbound has been through a lot since it first soft-launched in Early Access three years ago. Last year saw its official 1.0 release and now developer Chucklefish has announced that the indie constructor has sold over 2.5 million copies.

“2016 was really huge for us! In July, we finally released Starbound 1.0 after five years of development. Over the Christmas break, we hit another milestone – we’ve sold over 2.5 million copies of Starbound! I’m trying to visualize a crowd of two and a half million people, but I’m struggling. We’ll just go with… that’s a lot of people? That’s a lot of copies! That’s a lot of alpaca suits and Matter Manipulators and dead Poptops,” wrote the developer in a blog post.

The good news for you, the gamer, is that Chucklefish is far from done with Starbound. We already saw the 1.2 Vault update late last year bring a buttload of new content, and its hard at work on another. “Next patch, we’re working on fleshing out a part of the game that’s exciting to a lot of us in the office, as well as a lot of you out there: space! We’ve got lots of big plans for this update, but here’s a little preview showing some of what we’ve got in the works.”

Check out this cool little gif for a sneak peek at what’s in store!