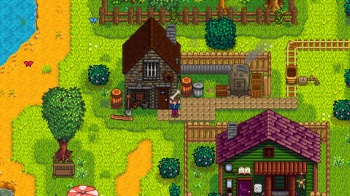 Stardew Valley developer Concerned Ape says he is scrapping the planned Wii U version of the game in favor of Nintendo’s new toy.

Got some good news and bad news for console gaming fans of Stardew Valley. Release dates for the console versions have been revealed, but, the Wii U is not among them. Instead, developer Concerned Ape says he is “switching” to the Nintendo Switch.

Stardew Valley will launch in North America for the PS4 on December 13th, 2016, and for the PS4 in Europe and the Xbox One globally the next day. Pre-orders for the Xbox One (globally) and PS4 (Europe only) will begin on November 30th, 2016.

“Stardew Valley will not be coming to the Wii U, however. Looking at Wii U and the current gaming landscape, we made the difficult choice to shift our development efforts to creating a version for Nintendo Switch. I am really looking forward to the Switch, and I believe that the Switch’s unique capabilities could create some exciting opportunities for Stardew Valley,” wrote Concerned Ape in a blog post.

“I do want to emphasize that I am absolutely committed to seeing Stardew Valley on Nintendo platforms, and I really do appreciate your support and understanding in this,” he added.

He didn’t offer any sort of release window for the Switch version of the game, but given that the console is due to launch in March, 2017, it’ll have to be some time after that.

Rogue One Will Never Get a Sequel