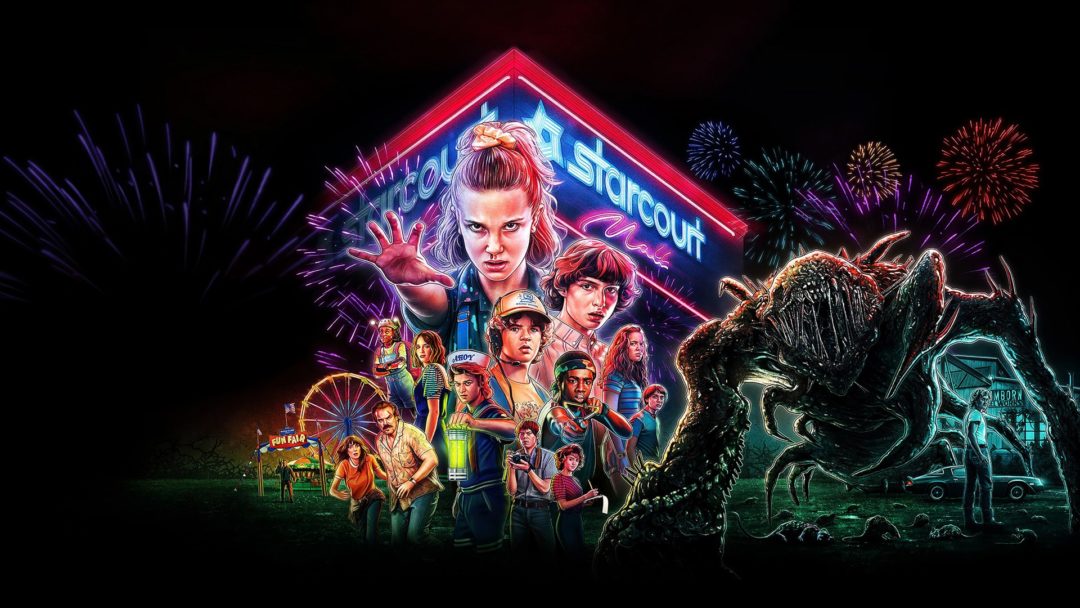 There is something to be said for sci-fi epics that borrow from occult symbolism and are bold enough to pitch it all to a teenage audience. The third season of Stranger Things feeds on a diet of self-conscious American capitalism and conspicuous Freudian references. It manages not only to sidestep inevitable phony ’80s nostalgia but also draws on the magnetism of Steven Spielberg and John Carpenter epics like Close Encounters of the Third Kind and Halloween. The result is a warped, gripping, supernatural horror story that engages audiences on multiple levels, building to a wholly spectacular denouement that belongs on the big screen.

While this third installment of the series inevitably pays homage to cult classics, (Back to the Future is gleefully sutured into the dialogue.) the show’s biggest draw is the blockbuster magnetism injected into eight hours of slick, fast-paced action. It’s only comparable to a sugar rush from a cherry Slurpee. In a nostalgia-gorged generation, why do we still have such an appetite for this material? Beyond feeling like a Stephen King adaptation, Stranger Things hits on a deeper level, processing the grief that comes with a loss of childhood innocence. This theme is explored at length throughout the third season, offering the darkest vein of satire, horror, and sci-fi of all three seasons.

If you don’t have time to recap the entire series, you should at least revisit the end of season 2 before starting season 3. Beginning precisely a year after the events of the second season, a group of evil Russians is working to re-open the gate to the Upside Down, which Eleven (Millie Bobby Brown) previously used her powers to close. Of course, they’re not prepared for the consequences, and the smart-talking kids, though scattered, independently find themselves engaged in a deadly battle for freedom.

The Duffer brothers have a tightly controlled timeline. The season begins on June 28, 1984, progresses to June 30 an episode later, and has arrived at July 4 by episode four, with the drama coming to a climax during the holiday festivities. Cynically, it’s a transparent marketing ploy to coincide with the Netflix release, but this precisely-engineered time bomb makes for a visceral, compelling season.

With an ensemble cast this wide, it’s a challenge to unify each character’s subplot, and digressions in the beginning of the season don’t find their rhythm until some three episodes in. Summer romances ensue between Mike (Finn Wolfhard) and Eleven, not to mention Lucas (Caleb McLaughlin) and Max (Sadie Sink), but these go about as well as predicted: The Upside Down of adolescence is complicated. Nancy (Natalia Dyer) and Jonathan (Charlie Heaton) snag internships at the local paper, The Hawkins Post, and there’s a fantastic role reversal between an ice cream-scooping Steve (Joe Keery) and a wiser, older Dustin (Gaten Matarazzo) who gives Steve sage advice like, “Don’t you think it’s time you move away from primitive constructs such as popularity?”

Robin (Maya Hawke), a freshly introduced manic pixie dream girl, is a lot of fun, fluent in multiple languages, and ultimately a catalyst to the adventure. Her plot with Steve and Dustin felt cliche more than once, but there are easy comparisons to Star Wars (Note also the use of John Williams’ theme during a D&D campaign.) and the Han Solo/Leia banter that lifts the tone when the operatic action becomes too somber.

Max’s older brother Billy (Dacre Montgomery) is fleshed out during Stranger Things season 3, a strategic maneuver that suddenly puts his actions in the second season into perspective. It shows forward thinking on the part of the Duffer brothers, who clearly had a plan for him since then. Season 3 also throws the events of the first two seasons into relief, raising the stakes from a juvenile chase to a sickening deconstruction of humanity akin to The Fly and They Live.

The score that plays over Montgomery’s performance at the end of episode 3 has an American Psycho/Tarantino-esque chill, delivering the first truly haunting segment of the season. While I’ve long felt as though the Upside Down sequences represent some kind of Freudian dream state, the balletic choreography of the scene and the quality of the special effects caught me completely off guard.

The use of archetypal Russian villains is less enjoyable to poke fun at in today’s climate. Comic trio Hopper (David Harbour), Joyce (Winona Ryder), and Murray (Brett Gelman) toy with the trope, and their segment is as enjoyable to watch as it is bemusing to the Russian engineer Dr. Alexei (Alec Utgoff), who tags along for the ride. But beneath their capers are stronger undercurrents. As Murray explains to Alexei at a fairground: “[These games] have been designed to present the illusion of fairness. But it’s all a scam, a trick, to put your money in the rich man’s pocket. That, my friend, is America.”

We could take Eleven’s use of the American flag as a blindfold while she uses her powers as symbolic of collective blindness to the torture she has been subject to in the name of the American ideal of power. Equally, Independence Day takes on a very different meaning when there are life-threatening forces at play, and even the most American of figures ⁠— misogynistic news editor Tom Holloway (Michael Park) or Trumpian Mayor Larry Kine (Cary Elwes) ⁠— become more monster than human, skewering the idea of a fair and just America.

For all the emotionally intense sequences, the younger actors show a natural flair and maturity in their performances. Brown, in particular, suffers some of the most excessively traumatic sequences — perhaps it’s unfair that she should do all the heavy lifting when others are left to the sidelines or are even tempted to exploit her character’s powers. The rampant use of CGI makes distancing yourself from a performance possible, but the sheer volume of high-intensity scenes shows her irrefutable talent.

For such young actors, the cast of Stranger Things completely blows other performances out of the water. The finale has to be some of the finest television I’ve seen in a long time, shattering all my expectations. I’d recommend leaving breathing time in order to appreciate it fully as a standalone episode. Stranger Things might have risen to fame as a binge-show and a cheap gimmick to experience nostalgia, but its visceral performances, thoughtful screenwriting, and attention to cultural phenomena prove that there’s more to it than initially meets the eye.