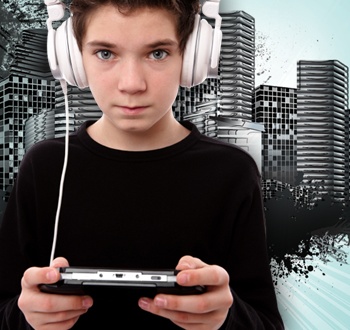 A new study suggests that there is a connection between a child’s fondness for videogames and their inability to pay attention to things that aren’t gaming.

Parents being concerned over their kids’ gaming habits is hardly news, whether they’re worried that the games will kill them, make them violent maniacs, or just make them fatsos. However, according to a study, parents can now worry that videogames are draining their kids’ attention spans just as much as the boob tube is.

According to the study published in the Official Journal of the American Academy of Pediatrics (available in .PDF form here), a survey of 1,323 elementary school students conducted over more than a year found that the gamers were more likely to have attention problems. Children who played games for two hours or more a day were 67% more likely to have attention problems like Attention Deficit Hyperactivity Disorder, whether at home or at school.

This is not just limited to gaming – studies on TV have returned similar numbers for children who spend all day watching Spongebob or whatever the hot new cartoon property is these days. One hypothesis posited by the report is that the often rich and imaginative worlds in games and TV shows draw the kids’ attention away from reality, making it difficult to concentrate. Another theory suggests that frequent and rapid subject changes in TV and games make it harder for children to focus for long periods of time on things that aren’t as inherently interesting.

However, as the researchers in question have actually studied statistics, the report is careful to note that this only implies correlation, not causation – there is no evidence suggesting gaming and TV causes ADHD. Iowa State University doctoral candidate Edward Swing, the lead author of the study, told CNN that the only thing that the study could definitively conclude was that there was some relationship between the two: “It wouldn’t surprise me if children who have attention problems are attracted to these media, and that these media increase the attention problems.”

As noted by the researchers, gaming itself often requires a high degree of focus and concentration – you won’t beat Halo 3 on Legendary by getting bored and going to ride a bike, after all.

However, given that a similar, simultaneous study of college students showed that attention problems in gamers and avid TV watchers were just as high, if not higher, researchers believe that a steady diet of flashy media may exacerbate an existing problem. The study recommends that parents limit their kids’ interaction with videogames and TV to under two hours a day, just in case – which honestly, seems more like plain common sense to me.