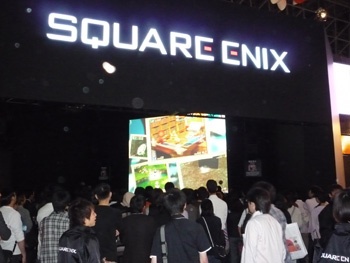 Tokyo Game Show is simply enormous, covering seven different halls within the Makuhari Messe convention complex. It’s much like the E3s of old, with towering booths, flashing lights, singing, dancing, people in costumes, and so many games that it’s difficult to see them all.

Our photo gallery shows off but a tiny fraction of everything there was to see at the show, but it does hopefully provide some sense of the sheer scale of the thing.

Though being at TGS reminded me of being at old E3s, there was one very important difference: TGS isn’t terribly loud. Perhaps it’s because the space is bigger, or perhaps it’s simply because the Japanese don’t feel the need to crank the speakers up to 11 like we do, but you could have a normal conversation in the middle of play areas, something rarely possible anywhere at E3. It was really nice.

To get an even better sense of what it was like to actually be on the show floor be sure to check out our video coverage of TGS, as well.