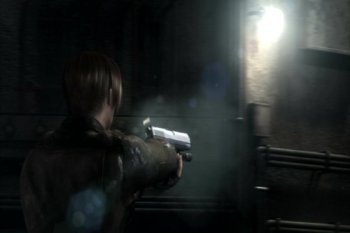 There have been three Resident Evil movies so far, but Resident Evil: Degeneration, which premiered at Tokyo Game Show, does something they didn’t: It sticks to the story of the games.

The RE movies strayed further and further from the franchise’s plot so that by the time Extinction came out, it was pretty much a Resident Evil movie in name only. Degeneration, on the other hand, follows RE canon so closely that its closing sets the stage perfectly for Resident Evil 5, due out this March.

The problem with sticking that strictly to the games as source material is that their stories are confusing enough on their own – trying to assemble them into a single coherent narrative is a task roughly equivalent to solving a Rubik’s Cube with your feet. I actually have a book that charts the entire series’ narrative up until RE4, and I can still barely keep track of it all.

Sony and Capcom worked hard to make sure that Degeneration works not just as part of the RE mythology, but also as a movie in and of itself. Which it does, to a point. Though the script does its best to connect the dots for the audience, without a certain base knowledge of the series, viewers are likely to be a bit confused from time to time. Actually, even those who are familiar with the franchise are likely going to be lost at certain points. My advice: Shrug off anything you don’t immediately understand and just stick around for the action sequences which are frequent, well-paced and make for great popcorn munching.

Seven years after the destruction of Raccoon City, terrorists are staging biohazard attacks all over the world – attacks that look an awful lot like the T-virus. One afternoon, someone, somehow, releases a zombie in the airport where Claire Redfield has just landed. The authorities move in fast to lock down the facility, then send in their best agent to contain the outbreak – none other than Leon S. Kennedy.

Claire and Leon, who first met in RE2, team up once again to learn who is behind the bioterror attacks and how they are getting their hands on the T-virus. Along the way, they meet a sexy cop, a sleazy senator, a clever scientist and a whole lot of undead. I won’t go into specifics (no spoiler, I), but if you’ve played through any of the games, you probably already have a fair idea of the kinds of twists and turns the story takes.

The movie is entirely in CG, which makes it look and feel rather like an enormous cut scene from one of the games – well, one of the more recent ones, anyway. It also puts it squarely in uncanny valley territory, however, which makes it somewhat harder to commit yourself to it the way you would with a live action film. The animation of the characters is absolutely perfect – high marks to the motion capture team, for sure – and the voice acting is, for the most part, top notch, but the faces just aren’t quite right, and the mouths never seem to sync properly. You might like the characters or hate them, but you never forget they’re constructs, which saps a bit of the enjoyment.

Degeneration also has some truly groan-worthy moments, so utterly stupid that you’ll roll your eyes, laugh out loud, or both. Most of them come during the movie’s final act, though; if you’ve stuck around long enough to see them, you probably won’t mind them too much.

Resident Evil: Degeneration takes itself a bit too seriously at times, but it’s dumb fun, especially for fans of the Resident Evil franchise. You can catch it at the New York City Horror Film Festival on November 13th, or at a screening in Los Angeles on November 18th hosted by Fangoria. Other than that, you’re probably going to have to settle for the DVD.