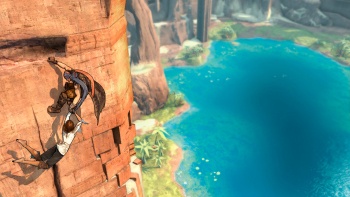 I had to wait more than an hour to play through a demo of Ubisoft’s Prince of Persia for the Xbox 360, but I’m glad I did. My time with the game was brief, but it was enough to restore my confidence in the franchise.

I was dropped into the middle of a level that conveniently had all of the typical kinds of obstacles that you might expect from the Prince of Persia series: cliffs, ledges, high walls, narrow beams. My Prince was soon swinging, shimmying, climbing, leaping and wall running, all with his trademark fluid grace. The Prince also has a special gauntlet that allows him to dig into and slide down walls, which can be handy when you need to drop, but don’t much feel like breaking every bone in your body.

A female sidekick tags along, but she’s more than just simple eye candy – she helps the Prince reach areas he wouldn’t otherwise be able to access on his own. If a jump is just a bit too far, hit the Y button and the girl will swing you safely to the other side. I’m not quite sure what her story is, but she clearly has some kind of mystical or spiritual powers, because although she’ll climb a wall right along with the Prince, she can also transform into a ball of blue light and fly from place to place.

She also works somewhat like the dagger in The Sands of Time. If you misjudge a jump or find yourself falling to your doom, hit Y and she’ll pull you back from the brink and drop you back somewhere safe. Given how tricky some of the acrobatics can be, you’ll be happy to have her around to save you. She can also transport you between special markers that hang on the walls. It feels somewhat out of place – if she can do that,why am I spending so much time hauling my ass up walls? – but it works well enough.

The demo also featured a fight with a large, inky black smoke creature that played out over a few different areas. The creature took on three different forms – normal, smoking, and entirely black – and only a particular attack would work on a certain form. If the enemy gets the best of you, once again, your female friend can come to your rescue, sparing you from certain death. I wish I had gotten to try fighting with smaller, less demanding enemies – I don’t feel like I got a real feel for what the combat is typically going to be like in the game. That said, if this demo was any indication, the boss fights should be lengthy and satisfying.

The new art style serves the game well, especially when it comes to the enemy creature and its minions. Both the Prince and his sidekick are animated beautifully, moving with convincing acrobatic finesse. Unfortunately, I couldn’t hear any of the demo – I would’ve liked to have heard what the soundtrack was like.

My time with the game was over far too quickly (mostly because of a particular jump that I kept screwing up), and I left wishing that I could’ve kept going – always a good sign.