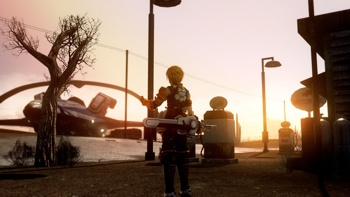 Here’s the thing about going to a game show in Japan – most of the game demos are in Japanese, so I can’t tell you what exactly is going on in Star Ocean: The Last Hope for the 360. The four characters featured in the level I tried didn’t stray terribly far from the typical JRPG roster of angsty heroes and feisty heroines, though, so let’s just take it as read that some sort of Big Bad is trying to take over the world and/or do serious harm to the little girl in the party, and Our Heroes are the only ones who can do anything about it.

My inability to make heads or tails of the cut scenes aside, the section I played was still pretty darn entertaining. The combat was in real time and extremely fast-paced. Hitting the left and right bumpers switched control amongst the four characters, with the AI controlling the other three quite well. They didn’t hang back to let you do all the fighting, healed themselves when they needed it and generally made themselves quite useful. Due to the language barrier, I couldn’t quite get a handle on how (or if) you could use magic and special attacks, but even just hammering away on the attack button was a fun way to cut through your enemies.

I crawled through a small section of dungeon, killing a number of lizardish creatures on the way. The dungeon’s design was fairly uninspiring, just dim lighting and carved stonework, but once I’d killed the boss and cleared the level, I emerged into a snowy field just outside a small village. The view was quite beautiful. Small details, like the nap of the bedding in the inn, or the way the snow rested on the branches of trees, made the village a place I wanted to explore, as opposed to just a pit stop between killfests.

My time with Star Ocean was short, and it certainly doesn’t appear to stray far from the expected JRPG conventions, but the combat was fast paced and solid, and it’s certainly a very easy game to look at. I’m looking forward to playing it in English.