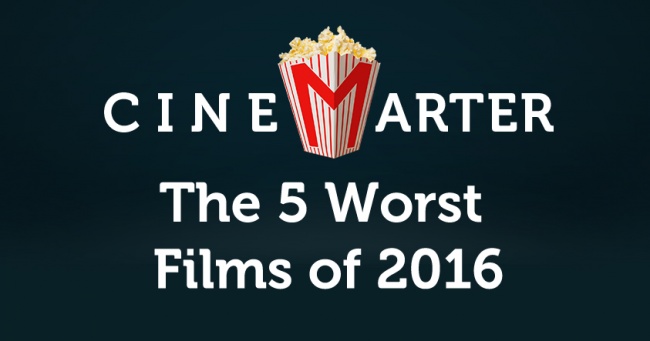 I highlighted a few of the great films of 2016 yesterday, but the list that arguably more people look forward to is this one, which details the worst. I don’t know what it is about bashing art that took people months or years to make, but it draws people in and it’s not exactly unenjoyable to write, either.

2016 had a lot of duds. Many of them came from the blockbuster variety, which is why a large number of people are calling it a bad year overall. I’d dispute that, but for a significant portion of the moviegoing public, that’s all that gets seen. Still, even the bad blockbusters weren’t as disastrous as some of the other films that I saw this year. There were films so bad that I don’t even want to call the people who made them “filmmakers” – that seems too generous.

Anyway, here are my 5 worst films of 2016. Just like before, they’ll be presented in alphabetical order. You can wait another week to find out which one “wins.”

The sad thing about The Choice is that it’s the most technically accomplished film on this list – by which I mean that, for the most part, it actually looks like a professional movie made by people who generally know what they’re doing. Unfortunately, it’s also an adaptation of a Nicholas Sparks novel, which means that it could win technical awards at this year’s Oscars and still be telling a story at which a gerbil would scoff.

The film is cringeworthy from start to finish, offers stupid or uncomfortably awful messages to its audience, tells an awful story, and doesn’t have good acting. Teresa Palmer redeemed herself later in the year with Lights Out and Hacksaw Ridge, but Benjamin Walker didn’t show up again, I can only assume out of shame. We need to stop Nicolas Sparks adaptations.

Persecution complexes are so fun. God’s Not Dead 2 is about a woman who answers a student’s question about something that’s in the Bible, gets told she violated the separation of church and state, and has to go to court to fight the charges. The case eventually becomes about proving the existence of God, because that makes complete sense.

This isn’t so much a film as it is an excruciatingly annoying 2-hour sermon, providing us with no balance, hilariously over-the-top atheist enemies, and poor fundamental filmmaking. These movies exist to make money from those who believe in their message and for no other reason. They’re cheap and get tickets booked by the dozen. They’re not aiming to be good, they’re not trying to be nuanced, and they don’t care if anyone but their target audience loves them.

Congratulations, God’s Not Dead 2, for being one of the worst things this year.

There are a lot of garbage comedies that come out every year, but 2016’s worst was probably Masterminds, a film that thanks to a combination of a lack of quality and a studio bankruptcy, was actually delayed over a year in order to even be released in 2016. It’s an example of a movie in which idiots act like idiots and do stupid things for 90 minutes. It’s not funny, and since it’s a poorly made film, it doesn’t have any technical accolades to fall back on.

There were other movies that could’ve been here: the closest to Masterminds was probably The Brothers Grimsby. But in terms of idiocy and a complete lack of laughs, it had to be Masterminds. It comes to us from Jared Hess, who directed both Napoleon Dynamite and Nacho Libre.

Norm of the North

And now we get to the films that barely even look like they’re real, let alone of a high enough quality to release them in theaters. Norm of the North is legitimately the worst theatrically released animated movie I’ve ever seen – and I mean that when it comes to its every facet. The animation is atrocious, the voice actors sound bored and untalented (to be fair, Rob Schneider is the lead), the plot is moronic and doesn’t make a lick of sense, and the jokes largely revolve around a twerking polar bear. How did this get put into theaters? Why would anyone think that’s a good idea? It looks worse than television shows that have significantly lower budgets.

The second piece of animated cinematic excrement that graced the screens in 2016 was The Wild Life. Technically “based on” Robinson Crusoe – but not actually – this is a movie that I almost wanted to be kinder to. It was made outside the studio system and didn’t have a large budget, and if it had gone directly to home video, we wouldn’t have an issue. After all, there’s a ton of terrible animated movies that go direct-to-DVD every year – many of which are probably even worse than The Wild Life.

But if you decide to release it in theaters, the gloves have to come off. You’re taking up screens and time from movies that deserve it. The Wild Life is a slap-dash effort to make a talking animals movie. It’s terribly animated, poorly voiced, contains nothing of substance or value, and barely even gets into that whole “being a Robinson Crusoe adaptation” thing. It’s a “hey, let’s give kids another movie at the cinema, ’cause they don’t know the difference between good and terrible” example. There isn’t anything good about The Wild Life.