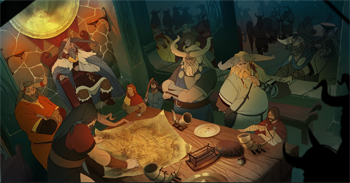 After being placed on “indefinite hold” by publisher, Sony steps in to aid port of popular tactical RPG.

Game developer Stoic has had a long road in bringing The Banner Saga to all of its planned platforms. Despite releasing nearly two years ago, announced ports to PlayStation 4, PlayStation Vita, and Xbox One have yet to materialize.

In a post to the game’s forums last week, Stoic Technical Director John Watson provided new information on the status of the ports. Watson explained that the studio hired to handle the task of bringing The Banner Saga to consoles missed multiple deadlines due to internal personnel issues and then closed its doors in May, leaving development incomplete and forcing Stoic to find another studio to finish the job. Due to the expense of effectively paying for the porting work twice, Stoic decided to put the Vita release on indefinite hold until the company could recoup some of the costs.

Now things are suddenly looking up for the Vita version. Sony has announced that they will be partnering with publisher Versus Evil to bring the game to the handheld. The announcement came by way of a tweet from Gio Corsi, Director of Third Party Production & Developer Relations at Sony, who promised more details would be forthcoming in 2016.

The PlayStation 4 and Xbox One versions of The Banner Saga are currently expected to launch January 12. A sequel is also in development at Stoic, planned to release in early 2016.