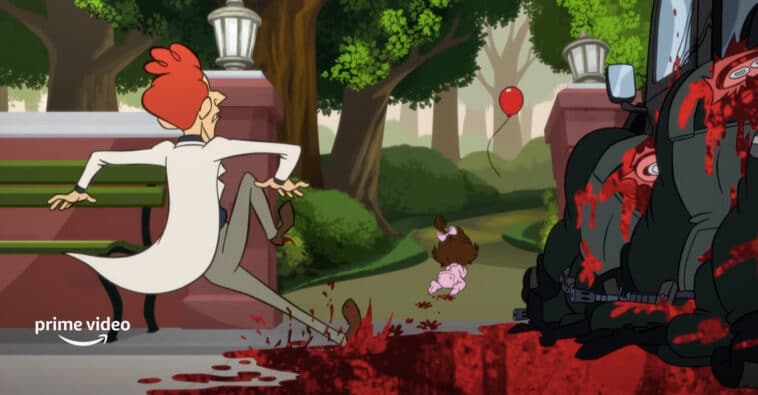 The Boys season 3 is right around the corner. However, Amazon Prime Video is releasing an animated anthology cartoon spinoff show called The Boys Presents: Diabolical with a March 4, 2022 release date to tide everyone over until then. The eight-episode cartoon show (12-14 minutes in length, similar to with The Cuphead Show!) will tell new stories set in the same universe as the streamer’s live-action superhero show. Each Diabolical episode will tell a different story, with a first-look teaser trailer giving us a glimpse at Laser Baby before she uses her powers to decapitate a group of soldiers. It’s all just as gory as you’d expect from The Boys, but you can see the action for yourself below.

The Boys lead Karl Urban announced the cartoon name Diabolical in a surprise reveal video last month. The anthology series has lots of potential thanks to the universe it’s set in and the cast working on it. Awkwafina, Garth Ennis, Simon Racioppa, Andy Samberg, and Aisha Tyler have each created stories for Diabolical, with three more coming from comedy team-ups Eliot and Ilana Glazer, Evan Goldberg and Seth Rogen, and Justin Roiland and Ben Bayouth.

Meanwhile, the mainline The Boys series had its third season teased just a few weeks ago. The ominous clip suggests all is not well for those who oppose the show’s big bad, Homelander. Fans can also expect to see another spinoff, but this one is set in an all-superhero college. The Boys doesn’t premiere on Prime Video until June 3 of this year, but Diabolical doesn’t feel far off with its March release date.