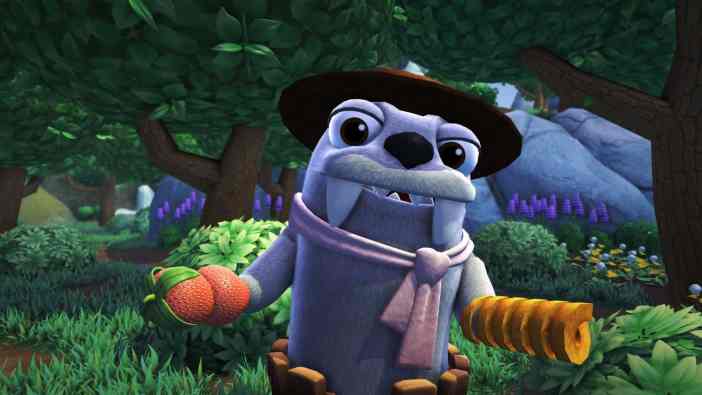 Aside from the Pokémon Presents presentation today (with its reveal of New Pokémon Snap), there wasn’t a ton of substantial news in the video game world. We did get a closer look at Bugsnax, an announcement of a new Google Stadia Connect, and a closer look at PlayStation 5’s ray tracing effects though.

One of the most beloved games revealed during the recent PlayStation 5 showcase was Bugsnax, which is coming to us by Young Horses, the team that developed Octodad. Bugsnax is a beautifully vibrant game, where everything in the world is yours to eat. In a recent USGamer interview with the developer, we learned that it will be a first-person adventure that features 100 different Bugsnax to study. It will apparently play like Ape Escape, according to the developer.

This is great news for those wanting more Ape Escape, a series that has been dormant for quite some time, though we shouldn’t rule out the possibility of a new entry just yet. Until then, Bugsnax might fill the void in a seemingly charming adventure.

Read More: Bugsnax: Behind Its Story, the PS5 Controller’s “Big Difference,” and That Catchy Song

Remember Google Stadia? No? Well, we’re getting more info about its upcoming games next month in an upcoming Google Stadia Connect. It will air on July 14 at 10 a.m. PDT / 1 p.m. EDT. These are short videos that are done in the style of Nintendo Directs, giving the audience a snappy look at what’s to come.

This is definitely what Google needs to do for the platform to gain more traction. It needs to tell us why we should buy in, and the way to do that is with games. Stadia launched at the end of 2019 and was met with mixed reception that Google has been trying to ameliorate since then.

Our next Stadia Connect arrives on July 14! Join us for a look at some of the games coming to Stadia later this year. https://t.co/y8do0Vi2p2 pic.twitter.com/o23mjuosXE

The latest Sea of Thieves update is live in the form of Haunted Shores. It will include spooky ghost ships, new shanties, improved non-verbal communication, events, and a lot of other new features.

Sea of Thieves has been trucking along since its release in 2018, and developer Rare has done a great job of keeping the content coming. This is part of the game’s June update, and you can check out more in the trailer below.

A new set of digital PlayStation games is live, and they’ll tug at your nostalgia strings in the Remasters & Retro PSN sale. In it, you’ll find popular titles like the incredible Resident Evil 2 (Deluxe Edition) for $22.99, Call of Duty: Modern Warfare Remastered for $15.99, and Grand Theft Auto: The Trilogy for $17.49. Keep in mind that these deals are for North America and will be live until July 2, 2020. Do yourself a favor and grab some of these callbacks in their remastered form!

The folks at Digital Foundry released a new video today showcasing some of PlayStation 5’s ray tracing effects in upcoming games, including Gran Turismo 7 and Ratchet & Clank: Rift Apart. The term “ray tracing” has been used a lot recently, especially with the new machines, and this video highlights how it will work in some of the system’s core games. In short, it will make the lighting look incredible and much more realistic.

The video is a fascinating look at what to expect from not just games in the short term, but the future of games on the machine. The upcoming Demon’s Souls remake will also feature ray tracing, which makes it so much more exciting.

Though we haven’t heard much from Team Cherry, the developer of the upcoming Hollow Knight: Silksong, we do know it’s coming and that it’ll include new characters. One of them was recently revealed via a riddle on the company’s public Discord channel. The character is believed to be named Huntress and looks to be an NPC who towers in size compared to your character.

It’s not much to go on, but seeing any news pertaining to the next Hollow Knight is exciting, no matter how insignificant it might be. There is currently no release date for it, unfortunately.

That does it for The Escapist News Roundup for 6/17!