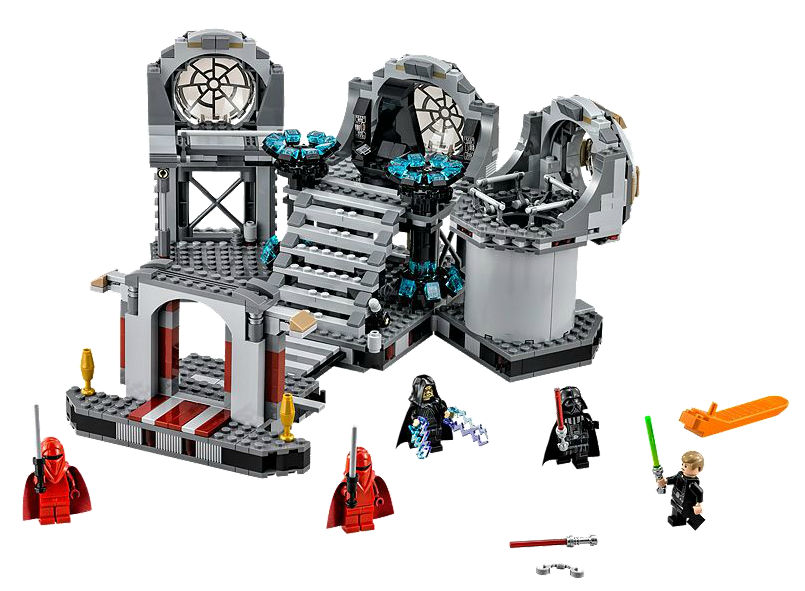 Ask the vast majority of Star Wars fans what the best film in the franchise is and most will answer The Empire Strikes Back. It’s not hard to understand why. It easily has the best story out of all the feature films and, in addition to one of the most iconic movie moments ever, contains more universe development and actual plot than both its predecessor and sequel combined. The thing is, it’s never been my favorite Star Wars flick to actually sit down and watch. For my money, that always been Return of the Jedi.

“But Stew,” you cry. “What about the Ewoks? They were so out of place and ruined the movie!”

Screw that! The Ewoks were awesome and so was the rest of the movie. The Rancor, the Sarlac pit, the speeder chase, the Battle of freaking Endor? In terms of sheer spectacle, the movie is a tour de force that manages to be awesome while still packing in great moments of narrative and resolution for its famous cast. Arguably the film’s peak in terms of both action and story is the duel between Luke Skywalker and Darth Vader in the Emperor’s Throne Room. While not as flashy as the fights in the prequel trilogy, it was filled to the brim with that brand of genuine personal turmoil that made Luke’s story so much more effective than anything his Dad experienced during his ill-fated arc. It’s easily one of my favorite sequences from the franchise, and perhaps even all of cinema itself.

In other words, I’d be lying if I were to say I was reviewing LEGO’s Death Star Final Duel construction set (75093) without any biases. That being put out there though, this is a really good LEGO set.

Based primarily on Palpatine’s aforementioned throne room, it contains 724 pieces, including five mini-figures. What I like most about it is the way it uses a focused scope to create what feels like a genuinely faithful recreation of the location. I honestly tend not to like LEGO sets based on locations. No small part of this comes from the compromises that often have to be made to keep them affordable and fit them in a box. The Mos Eisely Cantina set, for instance, was nice, but also struck me as feeling somewhat small despite the fact that it only contained about a hundred fewer pieces than the Final Duel. The reason, I think, is because the Cantina and its immediate surroundings were just too big a place for one moderately-sized LEGO set to portray. Final Duel comparatively, uses more pieces, but also limits itself to a smaller, closed-in location. The end result is a finished product that should sit well with your mental image of Palpatine’s throne room even though it’s obviously been scaled down.

The set itself is made up of four primary areas. The entrance/walkway, Palpatine’s throne/stairs, a balcony and the reactor shaft that Vader tosses Palpatine into at the end of Jedi.. For the most part, these sections are built separately during the construction process, but all link together in the end via a series of well-implemented connections that do the double duty of expanding and shrinking the set per the builder’s desires. The walkway, for instance, can be pushed underneath the throne room section. The balcony and reactor shaft, likewise, can swing toward and away from the center section to be more compact or more open. The difference in size isn’t insubstantial either. My (rough) measurements put it at about 10″x10″ with everything closed up and 12″x 12″ wide open. That might sound like a small difference on paper, but it’s a big deal when your designated LEGO shelf is already close to overflowing. Both configurations also look nice and leave you with decent access to the set’s little bits of extra functionality, of which it has several.

Most of them, of course, are little things, but they’re all nice touches and do a good job of adding more tangible play-ability to the set. Near the entryway, there’s a spot on the floor with a simple trigger that can send a mini-figure flying. The adjoining stairs have a similar switch that can be pushed to eject several of the steps. The balcony is collapsible with the flick of a finger and an extra lightsaber for Darth Vader can be pushed out of the floor behind the Emperor’s throne. The reactor shaft also includes a nice deep hole that you can toss Palpatine down if you ever get the hankering to re-enact his demise. They don’t count as extra, but the mini-figure contents of the set are somewhat impressive. In addition to a pair of Royal Guards, Final Duel includes Darth Vader, Luke Skywalker in his Return of the Jedi outfit and Emperor Palpatine. The set might be pricey at $79.99, but it definitely comes with enough features and mini-figures to get some actual, honest-to-goodness play out of.


With the recent reveal of LEGO products based on Star Wars: The Force Awakens, a set based on 1983’s Return of the Jedi might not seem like the most exciting thing in the world. Death Star Final Duel is a really impressive recreation though, that’s a lot of fun to build and equally entertaining to play with after the fact. It took me a little over three hours to finish this set, but I can guarantee that Star Wars fans, even considering its $80 price point, will find a lot more to love about it than just the minutes they spend piecing it together.

Recommendation: If you like LEGO and Star Wars and can afford the $80 price tag, there’s no reason not to get Death Star Final Duel.