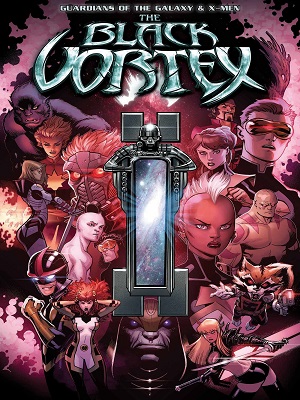 Marvel will be launching The Black Vortex, a new cosmic comic event starring the X-Men and the Guardians of the Galaxy, in February 2015.

Marvel’s announced a lot of new (depending on how you define “new”) books and events that should pretty much stuff your subscription box full come summer 2015. That being the case, the comics publisher has remained markedly mum about the actual details about these stories and what exactly fans can expect from them. That being the case, the company had a somewhat welcome change of pace today when it announced its latest new event: Guardians of the Galaxy & X-Men: The Black Vortex.

Slated for a February 2015 release, The Black Vortex will follow the X-Men and the Guardians as they team up with other space faring heroes to stop the villains Thane and Mister Knife from taking control of the titular Black Vortex, an ancient and powerful artifact with the power to transform anyone into “a titan of the cosmos.”

According to Marvel, the series will open with Black Vortex: Alpha and then “[continue] into all of Marvel’s cosmic titles including Guardians of the Galaxy, Legendary Star-Lord, All-New X-Men, Nova, Cyclops, Captain Marvel and others.” Black Vortex: Alpha will be written by author Sam Humphries with the remaining books falling into the hands of writers Brian Michael Bendis, Kelly Sue DeConnick and Gerry Duggan among others. The event’s kick off issue will feature art from Ed McGuinness.

Setting aside the fact that it’s just nice to actually know what’s going on with a Marvel event, I’ll put it out there that I’m personally pretty excited by this. Granted, it’s probably going not going to much different from any number of big cosmic narratives that Marvel’s published over the years. That said, I’m already reading a lot of the books that will be involved in The Black Vortex and if the quality of writing currently being exhibited in the likes of All-New X-Men, Cyclops, Guardians of the Galaxy and The Legendary Star-Lord carries over to The Black Vortex, it will at least be a fun read.