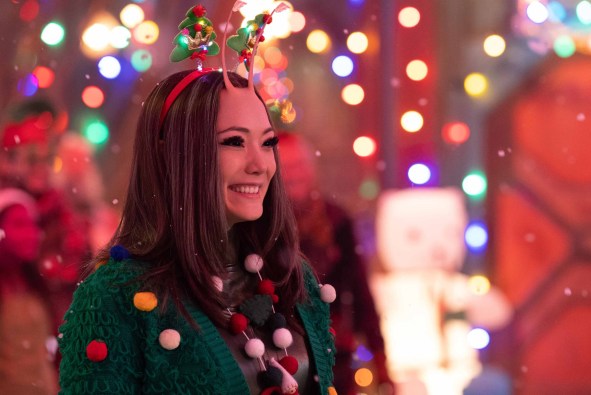 The Guardians of the Galaxy Holiday Special is a light and throwaway diversion from the Marvel Cinematic Universe (MCU), and that’s what makes it so charming. James Gunn has very obviously crafted the special as a love letter to seasonal programming — and with an understanding that part of the charm of this sort of festive event is that it’s incredibly silly, just a little bit crappy, and driven more by a loose sense of fun than by any grander purpose.

Gunn has openly acknowledged that the Holiday Special emerged quickly and fully formed. “I’ll be honest, I wrote the screenplay in a few hours, so it just kind of spilled out of me,” he told The Hollywood Reporter about the production of the adventure. “It was very easy. Everything about shooting it was easy. Everything about getting the performances out of people was easy, whereas Vol. 3 was torture in every way.” For better and worse, everything about the special seems relaxed.

Largely owing to his roots in low-budget filmmaking, Gunn has always had a keen understanding of how to capitalize on the resources afforded him. Indeed, part of the appeal of Gunn’s work on Peacemaker was watching the writer and director tap back into that approach, producing the series on a relatively tiny budget that forced him to be inventive while affording him complete creative control. The Guardians of the Galaxy Holiday Special is another example of this.

It’s obvious that the Holiday Special cost a reasonable amount of money. It features a large ensemble and several computer-generated characters, and it stars Kevin Bacon as himself. However, it’s also clear that Gunn is shrewdly capitalizing on the resources that Disney made available for the production of Guardians of the Galaxy Vol. 3 and that he is being judicious in his storytelling so as to ensure a significant return on investment. 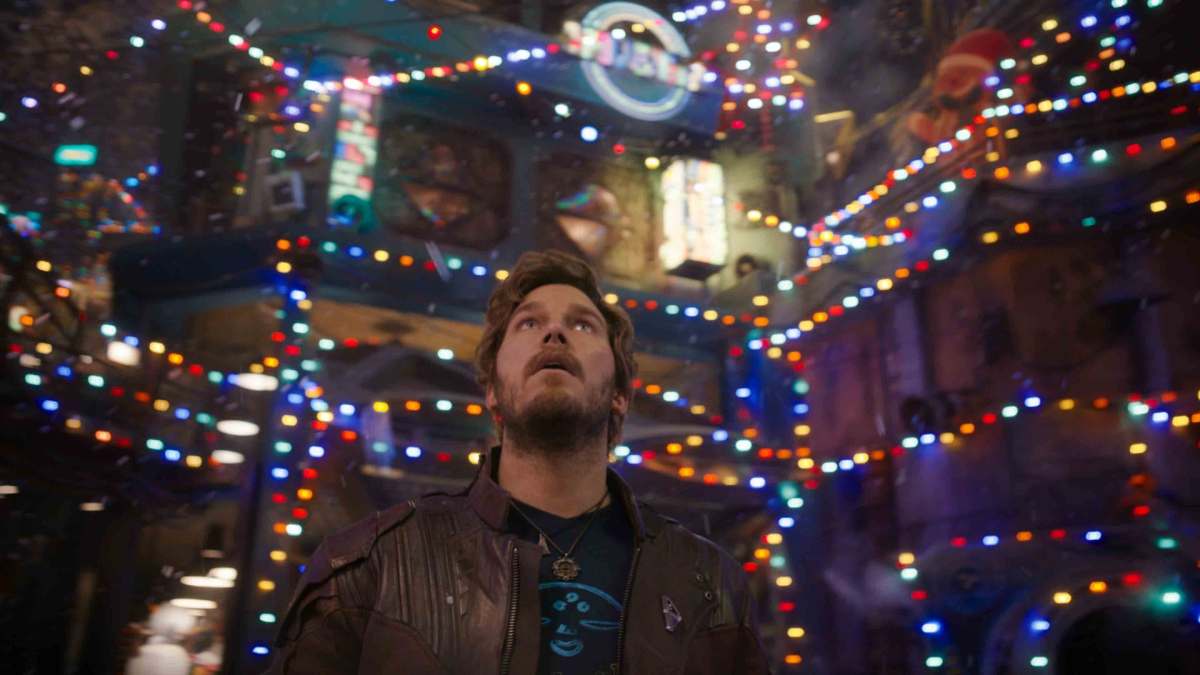 The Holiday Special minimizes the roles of animated characters like Rocket (Sean Gunn, Bradley Cooper), Groot (Vin Diesel), and Cosmo (Maria Bakalova). When it uses sets, it uses soundstages that were already available from other Guardians projects, like the town square in Knowhere and the cockpit of the Eclector. The adventure gives most of its screentime to two actors in makeup, which is a relatively cost-effective special effect. It also uses a lot of locations rather than green screens.

There is something enchanting and uncanny about the use of location work in The Guardians of the Galaxy Holiday Special, which places Drax (Dave Bautista) and Mantis (Pom Klementieff) in settings that feel more tangible than the “real world” spaces used in recent theatrically released features like Shang-Chi and the Legend of the Ten Rings or Doctor Strange in the Multiverse of Madness. The world of the MCU can seem so unreal that seeing Drax and Mantis sitting on the sidewalk feels like a special effect of itself.

The Holiday Special takes Drax and Mantis to Grauman’s Chinese Theatre in Los Angeles, in what feels like an acknowledgement of that other classic MCU Christmas adventure, Iron Man 3. Gunn had originally planned to do more shooting around Los Angeles, but plans changed due to the Omicron outbreak. Even allowing for this, the decision to shoot in real external locations around Georgia gives the special a much more grounded sensibility than a lot of modern MCU productions.

There is something inherently incongruous and ridiculous about taking these cartoonish comic book characters and dropping them into a world that is recognizably realistic, worlds away from the empty, color-corrected surroundings of Avengers: Infinity War or Avengers: Endgame. It’s to the credit of the Holiday Special that it is never embarrassed by this, comfortably placing Drax and Mantis alongside street performers posing as Captain America and Captain Marvel. 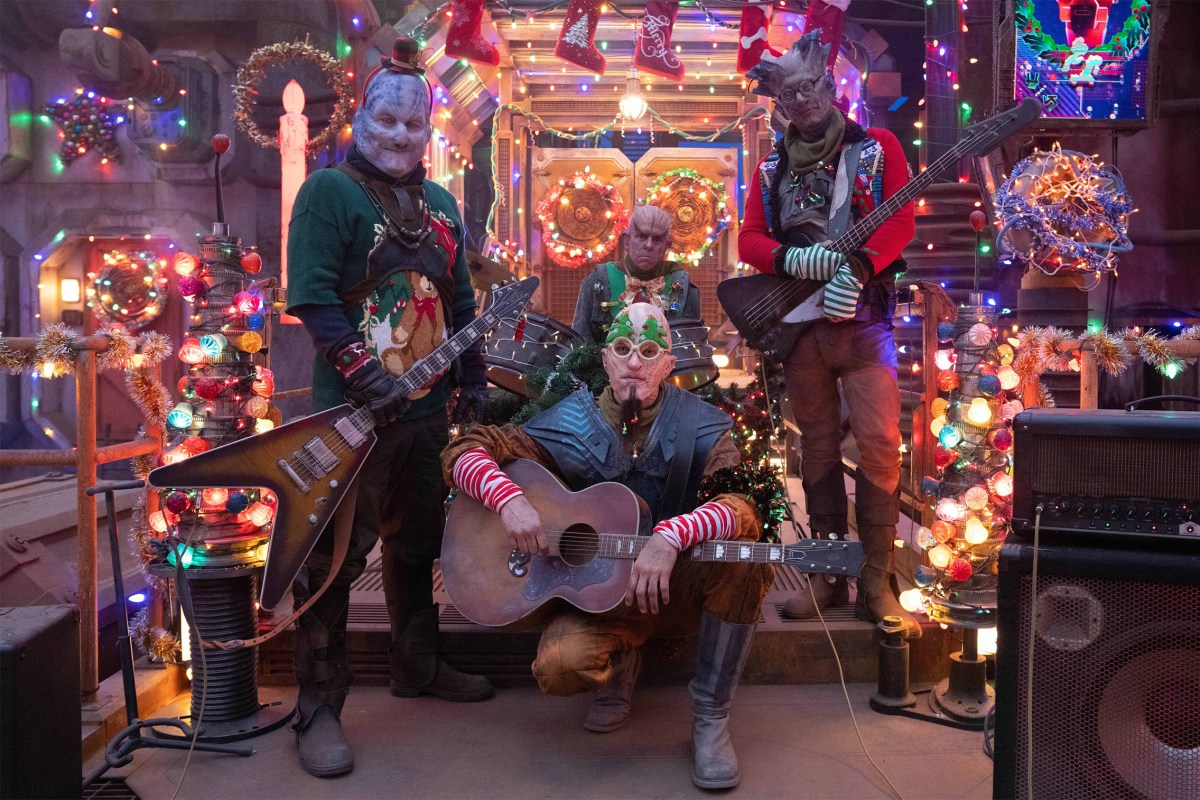 It’s goofy and it’s silly, but isn’t that okay? Isn’t Christmas supposed to feel a little indulgent and a little tacky? While the Holiday Special inevitably circles back around to an important and earnest point about the true meaning of Christmas, Gunn is never shy about acknowledging the absurdity of it all. Much of the best Christmas culture is more than a little bit crappy. That’s the entire joyful aesthetic of the Hallmark Christmas empire. If it’s too polished, it’s not really in the spirit of things.

The Holiday Special leans into this. When Bacon comes home from Christmas shopping, he relaxes by watching Santa Claus Conquers the Martians. The Holiday Special is more than a little indebted to that campy and crappy classic about aliens traveling to Earth to kidnap a celebrity. Of course, the Holiday Special draws from another iconic piece of cringe-inducing Christmas culture, with even the title alluding to the infamously terrible Star Wars Holiday Special.

It’s obvious that everybody working on The Guardians of the Galaxy Holiday Special is having a good time, to the point that one might almost believe that Gunn concocted the entire special as an excuse to spend a bit more time working with his cast, particularly Bautista and Klementieff. However, it’s also clear that the Holiday Special is working from a script that was written in a flurry, powered by a bunch of fun ideas but in need of a few more drafts. 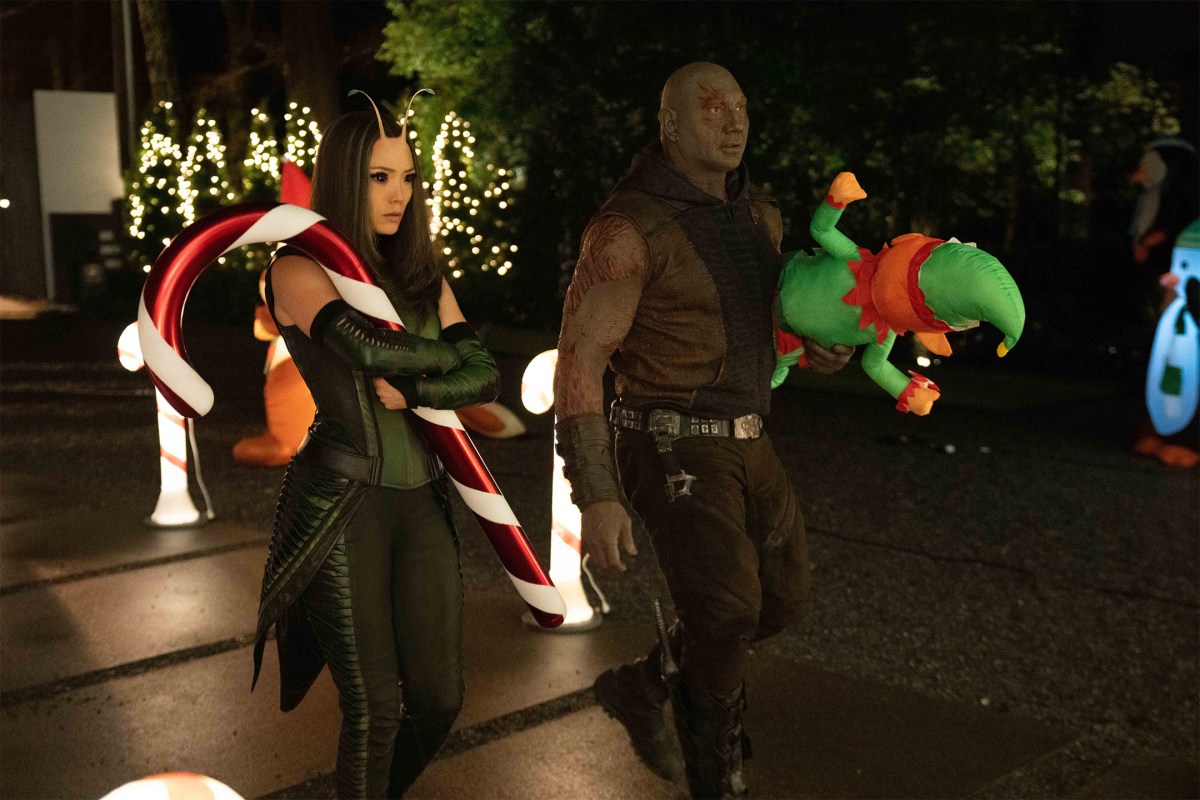 This is the paradox of something like The Guardians of the Galaxy Holiday Special, where it’s an obvious and affectionate homage to a genre defined by its slipshod nature. If the Holiday Special were more refined and considered in its structure and its production, it would feel like a betrayal of the premise. At the same time, there’s an understandable debate to be had whether this self-awareness is enough to completely forgive the roughness of the project as a whole.

The Guardians of the Galaxy Holiday Special is probably Gunn’s weakest project to date, in the same way that Black Panther: Wakanda Forever is safely Ryan Coogler’s weakest film. Even then, there’s a lot of charm to be found in the project because of its flaws, not in spite of them. For example, Gunn and cinematographer Henry Braham rely heavily on handheld cameras to create a sense of fluidity and spontaneity often lacking from this perfectly controlled shared universe.

More than that, there remains a strong sense that Gunn deeply cares about these characters and the world that they inhabit. It’s strange to think that Gunn almost didn’t get to make Guardians of the Galaxy Vol. 3 because of a right-wing hate mob and that The Guardians of the Galaxy Holiday Special is one of the last projects that Gunn will make with Marvel Studios and this crew before decamping to Warner Bros. to oversee their shared universe of DC characters.

Guardians of the Galaxy put Gunn on the map, establishing the low-budget schlock director as a blockbuster filmmaker. It’s a film series that is obviously in serious conversation with Star Wars, one of the foundational myths of American pop culture. Getting to do an entire riff on a piece of cult Star Wars media feels fitting. It’s also nice the Holiday Special retains an emotional arc that fits with Star Wars, even picking up from a deleted plot point in Guardians of the Galaxy Vol. 2.

The Guardians of the Galaxy Holiday Special is a strange bauble. It isn’t necessarily what anybody asked for. It is a little strange and misshapen. It’s the trinket nestled snugly at the bottom of the stocking. It’s maybe a little cheaper and tackier than the other gifts, but it’s also clearly presented with good will. Ultimately, it fits with the mood of the season around it.