Atari classic Centipede and surgical-horror film The Human Centipede have been grafted together to create an 8-bit Flash parody. 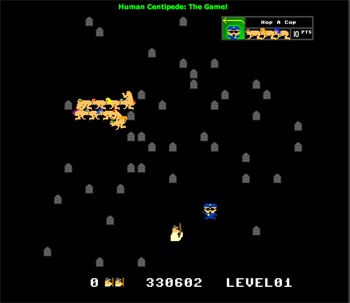 The Human Centipede (First Sequence)has earned a ton of publicity over the past few weeks, mainly because the film has left critics nauseous instead of impressed. Reading a synopsis of the movie is enough to make one feel queasy; it’s hard to imagine keeping one’s lunch down if a person had to actually watch the described events on a screen. Unsurprisingly, a parody of the film has been created in the form of a video game, which is based on the 1980 Atari classic Centipede.

Players assume the role of Dr. Heiter, the film’s mad surgeon who assembles the titular creature. According to the game’s intro screen, “your patients are not pleased with being human centipedes and have begun to rebel against you. Now you must take your trusty rifle and put down these human centipedes like the bad dogs they are.”

The differences between this game and Centipede are really only in the visuals. The encroaching centipede is a chain of human bodies linked together, other enemies are police officers and police cars, and the centipede chain can be slowed down when Dr. Heiter collects water glasses laced with roofies.

Other than that, the gameplay is identical to the original Atari title. Players shoot at the oncoming centipede, which splits in two if any body part other than the head is hit. Tombstones serve as the same obstacles the mushrooms did in Centipede, and the other enemies bounce across the player’s field of movement.

The satire is definitely well-done, but it’s not exactly a comfortable play experience when you know just what the game is mocking. The longer you play, the more icky you feel.