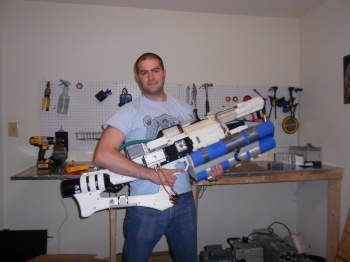 In a surprising DIY project, an Imgur user designed a plasma-firing railgun using a 3D printer and widely available components.

In general, I consider myself a peaceful human being, but I can’t help but get a little excited about futuristic weapons. We’re already equiping the Navy with lasers that stun or kill while we test railguns which are even more explosive. But one civilian with engineering smarts might have done something more impressive – design a portable handheld railgun using 3D printed parts. The finished device can even fire plasma rounds. I’ll repeat, this is a handheld railgun which fires plasma rounds.

Going by the usernames “NSA_Listbot” and “xtamared”, the railgun’s creator has posted images and videos to Imgur and YouTube describing his work. This portable version uses six 300J, 350V, and 5500uF electromagnetic capacitors to fire each shot. That propels the round forward at 560 miles per hour, leaving a solid dent on targets in its path.

All things considered, that speed is pretty good for a DIY weapon. (You average bullet travels at roughly 1500 mph, while a military-grade railgun can reach 13,000 mph.) But one special touch is that this weapon can fire different ammunition types. So far, NSA_Listbot has tested his portable railgun on rods of graphite, aluminum, copper-coated tungsten, carbon, and teflon – otherwise known as plasma. Which of course, makes this railgun sound even more futuristic and badass.

That’s not to say the portable railgun is a practical weapon, by any means. First of all, it has an extensive charging time, with some tests requiring three minutes before a shot could be fired. For all the energy going into each round it does surprisingly little damage, and couldn’t even clear a cantalope it was emptied into. And that’s not getting into its general unwieldiness for anyone without a Gears of War-type physique.

That said, it’s still an impressive achievement and looks fantastic to boot. With a few tweaks to ensure it’s non-functioning this could be an amazing cosplay piece. At least until someone else figures out how to build a better plasma railgun with their 3D printer.