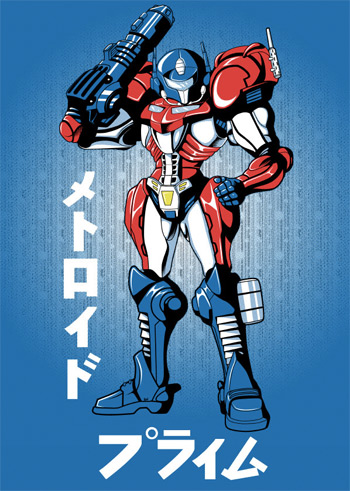 Artist Timothy Lim splices the DNA of Optimus Prime, Samus, and a slew of other iconic characters.

Timothy Lim is an illustrator from Arkansas who spends a lot of time crossbreeding iconic entertainment characters. Batman, Breaking Bad, Star Wars, and Mortal Combat have all received the Lim treatment, but he obviously has a soft spot for Optimus Prime. In one his recent pieces, Optimus and Samus have undergone a gender-bending, biomechanical transformation.

“As corny as it may sound,” Lim told Game Informer, “I see Optimus Prime as the robotic amalgamation of those qualities and virtues that we admire in men, fathers, and heroes from the greatest generation: He represents honor, duty, sacrifice, freedom, and valor. He’s one of the childhood heroes whom I can say acted indirectly as a role model. I still haven’t mastered how to turn into a semi, but I’m working on it.”

Even though Lim isn’t a hardcore gamer, his work draws a lot of inspiration from the video game industry.

“I play casually when I have the time,” he said, “but for the most part I just try and keep myself informed of what’s current. I actually got my first publications in PlayStation Magazine (PSM), so I owe a lot of my Internet connections (and fan base) to video games. Recent years have shown a great deal of interest and love towards video game art, which I’m glad to see.”

Right now, Lim is working with Valve on some kind of top-secret project, but he wasn’t willing to elaborate. “If you like Valve,” he said, “you’re going to be very happy with what comes next.”

Be sure to check out more of Lim’s work in the gallery below, or look him up on deviantART.