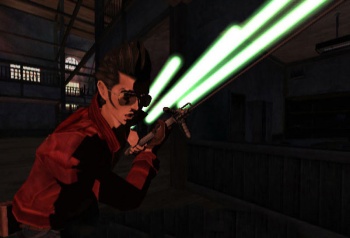 Let’s go exploring! With January comes a certain amount of restlessness, and what better way to pass the time than by wandering around in recent history with some of these notable open-world games? This week (January 18th – January 24th) we’ve got Burnout Paradise, Endless Ocean, No More Heroes, and Massively Multiplayer title Pirates of the Burning Sea to keep our exploring hearts warm while the weather still proves a bit too cold to go outside.

Originally given the uninspiring title of Burnout 5, Burnout Paradise came out this week last year, and shortly thereafter kicked off a year filled with free downloadable content. Well received by fans and critics alike, over one million copies sold within the first three months of release, pushing the series total to over 15 million units sold. Burnout Paradise also created a bit of chatter last fall due to the historical decision of President-elect Barack Obama’s team to purchase in-game campaign advertising. Tomorrow’s feature articles include an intriguing interview with UK-based developer Criterion Games, so we’ll just keep on driving through the roadways of time and park the time machine by the Wii to talk about two games that were superficially different, but still had more in common than just being released within a day of each other.

Endless Ocean is clearly one of those games that divided critics, with many finding it to be a definitely quirky keeper and some critics just finding it to be an absolute sleeper, with a great number of people just settling for the nondescript, neutral term of ‘unique’. It did rather well sales wise in North America, and filled the mid-winter dreariness with a sandbox style play that found even some of the most jaded, hardcore and bitter gamers quietly admitting they found “kind of cool”. Personally, I was hooked on the large variety of fish and swimming about with my underwater camera in search of the perfect shot more than I was the built in and totally unnecessary plot.

On the absolute other end of the Wii-spectrum sat No More Heroes, filled with action, motorcycles, and lightsaber-style katanas. Like Endless Ocean, it also featured a sandbox style world, however, unlike Endless Ocean, No More Heroes sold quite badly in Japan. It did however get slightly higher ratings overall, proving that it is much easier to analyze an action title than a game title most people were not sure how to classify. Even though the game had flaws, people were encouraged to buy No More Heroes anyway, and therefore, they did.

In Massively Multiplayer gaming news, Pirates of the Burning Sea launched in North America on January 22nd. Created by Flying Lab Studios and published by Sony, the game launched with fairly positive reviews, with the caveat that the game employed a “steep learning curve”.

To wrap up this week in gaming, we’d like to wish developer Will Wright a very happy birthday, as he was born on January 20, 1960. Wright is of course no stranger to anyone in the industry, having created some of the ultimate sandbox games such as SimCity, The Sims, and most recently, Spore, all directly influenced by his early-childhood Montessori education. What many people don’t know is that he actually got his start with a simple shoot-em-up title called Raid On Bungeling Bay for the Commodore 64.

Next week in gaming history we’ve got a diverse range of titles making a splash in the history pool, and among a bit of controversy and other things, gamers gathering for charity.

Researcher Nova Barlow loves open-ended games, but not as much as real travel.