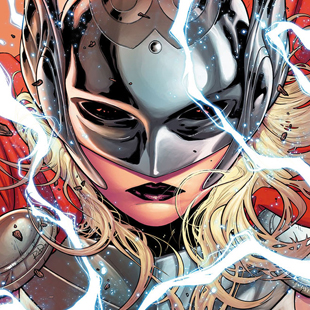 The God of Thunder is being replaced by the Goddess of Thunder, though it’s the job, not the character, who’s getting switched.

In hindsight, Marvel gave us a rather obvious hint yesterday, when it revealed a “thundering” announcement planned for this morning on the ABC morning talk show, The View. While there was early speculation that it might have something to do with Captain Marvel, the reveal turned out instead to be the news that beginning this October, Thor will be getting a genderflip.

Granted, it won’t be the original character, who will still exist in the Marvel universe in a depowered state. Instead, as a result of the events of an upcoming story, Thor will be found unworthy to wield Mjolnir and will lose his title as Asgard’s God of Thunder. The mantel will be passed to an as-yet unnamed woman*, who will become the new embodiment of Thor in the comics. Marvel later expanded on the news in a press release, announcing a new monthly Thor comic, debuting this October and written by Jason Aaron (Original Sin, Thor: God of Thunder) with art by Russell Dauterman (Cyclops).

Related: The Switch: 3 Classic Characters That Should Be Gender Swapped.

The new incarnation of Thor represents a serious effort to appeal to female comics readers, one reflected in the recent emphasis on superheroes like Carol Danvers and the new Ms. Marvel. “The new Thor continues Marvel’s proud tradition of strong female characters like Captain Marvel, Storm, Black Widow and more,” Marvel editor Wil Moss was quoted as saying in the press release. “And this new Thor isn’t a temporary female substitute – she’s now the one and only Thor.”

There’s very little else known about just who the woman is taking on Thor’s mantle. However, it was revealed during this morning’s episode of The View that the new character will be someone who is saved by the original Thor, before following him to Earth and remaking herself to take over his role. One possible candidate is Angela, the former Spawn character acquired by Marvel whose most recent appearance in Aaron’s Original Sin tie-in miniseries, Thor: The Tenth Realm, in which it was discovered that she is, in fact, the daughter of Odin and sister to both Thor and Loki.

And what of the original God of Thunder? If the upcoming “Time Runs Out” story, running through the Avengers and New Avengers books is any indication, Thor (assuming he’s still called “Thor) has a tough road ahead. Recent art for the even shows Thor still fighting with his Avengers cohorts, though sporting an artificial arm and a large battleaxe. One can only speculate, but it seems likely that eventually, the old version of Thor will find a way to reclaim his title.

Read the full press release below.

This October, Marvel Comics evolves once again in one of the most shocking and exciting changes ever to shake one of Marvel’s “big three” – Captain American, Iron Man and Thor – Marvel Comics will be introducing an all-new THOR, GOD OF THUNDER. No longer is the classic male hero able to hold the mighty hammer, Mjölnir, a brand new female hero will emerge will who will be worthy of the name THOR. Who is she? Where did she come from and what is her connection to Asgard and the Marvel Universe?

“The inscription on Thor’s hammer reads ‘Whosoever holds this hammer, if HE be worthy, shall possess the power of Thor.’ Well it’s time to update that inscription,” says Marvel editor Wil Moss. “The new Thor continues Marvel’s proud tradition of strong female characters like Captain Marvel, Storm, Black Widow and more. And this new Thor isn’t a temporary female substitute – she’s now the one and only Thor, and she is worthy!”

THOR is the latest in the ever-growing and long list of female-centric titles that continues to invite new readers into the Marvel Universe. This female THOR is the 8th title to feature a lead female protagonist and aims to speak directly to an audience that long was not the target for Super Hero comic books in America: women and girls.

* Originally, we stated it would be a female Asgardian. This is absolutely true, as whoever wields the title and powers of Thor is an Asgardian in the same way that someone elected to the US Senate is a member of the US Government. However, it is not yet revealed from where the character hails. There is the possibility that the Asgardians will elevate a mortal or some other non-Asgardian being to divinity.