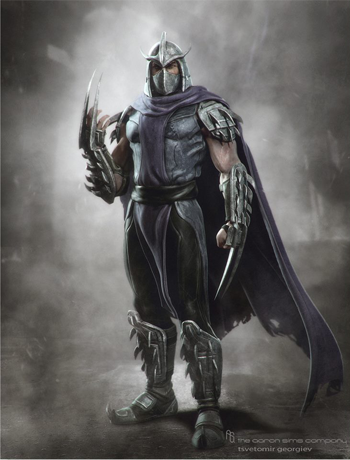 Update: The Aaron Sims company, for which the TMNT concept art was originally created, has requested that images of Krang, Bebop & Rocksteady be removed, as the studio has not approved their publication. The images have also been removed from the Facebook of the artist who originally posted them, replaced by an explanation that they are “For next TMNT movie that is not released yet.”

Original Story: Lost in the shuffle over the Michael Bay produced Teenage Mutant Ninja Turtles reboot this past summer was the memory that the film was almost something very different. As originally planned, the reboot would’ve created an entirely new mythos for the franchise, including the Turtles themselves being aliens.

That version of the film didn’t end up getting made, delaying the project. But leaked versions of the script appeared online later, revealing that it would’ve featured the live-action debut of three characters from the 1980s TMNT animated series: Interdimensional supervillain Krang and mutant henchmen Bebop & Rocksteady. Now, designer Tsvetomir Georgiev has posted concept art of the characters to Facebook.

Along with the more-realistic rhinoceros and warthog mutants and the brawnier than normal Krang; the images also include a classic version of The Shredder and an alternate variation with army-style armor. That version may have been related to Shredder’s new origin (in the “alien” script) as a military commander named Colonel Schrader.

More of Georgiev’s work (some NSFW) can be found here.