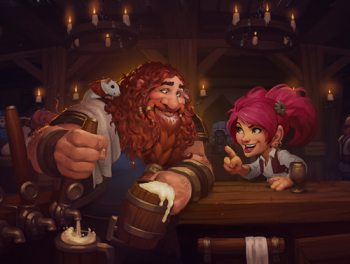 New features coming to Hearthstone include the ability to complete daily quests against friends, as well as easily import and export deck lists.

Hearthstone updates don’t just add new cards, sometimes they add new features as well. Today, Blizzard has outlined two such new features that will be coming in an update in the next few weeks: friendly quests and deck importing/exporting.

Friendly quests is a simple quality-of-life change for those of you who like to play against your buddies, rather than endlessly climbing the ranked ladder. Essentially, you’ll be able to complete your daily quests (Win 5 games as rogue, cast 30 spells ect) in friendly challenges.

The second new feature, deck importing/exporting, is something that is sure to make netdeckers happy, as well as those who feel like 18 deckslots just isn’t enough.

Here’s how it works:

If your deck is already full, when you select the Hero portrait at the top of a deck in your collection, you’ll see a copy button. Press that button and your decklist will be copied to your clipboard, which can be pasted into a text document. At the bottom of the text document, you’ll see a “code”, which can be shared with anyone. When you go to create the new deck, Hearthstone will “know” when you’ve got a valid decklist on your clipboard, so you’ll be asked if you’d like to create a new deck with the one you’ve got copied.

Just like deck recipes, if you lack some of the cards, the game will offer suggestions for replacements.

The Witcher TV Series Is In the Works at Netflix