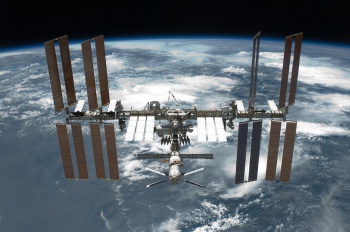 We hope their spaceship knows which way to go.

The International Space Station (ISS), a football-field-sized testament to the good things that come from co-operation and ingenuity, has spent the past few years orbiting planet Earth and sending back various packets of data concerning a wide variety of space-based scientific experiments. While experiments are ongoing, it is being prevented from telling anyone about them at the present moment because NASA has lost touch with it.

Owing to a malfunction in the main data relay system, the only comms link currently connecting the ISS to the rest of humanity is a series of Russian ground stations equipped with the right kind of recievers. At the moment, NASA has given no estimate for when the main relay and the station’s connection to its satellite communications network might be re-established.

In a statement, NASA said that it was able to confirm that all six current ISS residents – three Russians, two Americans, and a Canadian – were doing well as of the station’s last check-in with Russian ground control. While they had them on the phone, NASA says that it also instructed the team’s Expedition Commander, Kevin Ford, to “connect a backup computer” and in doing so, presumably set the station on the road back to open channels with Mission Control in Houston.

Given their history with space calls, it’s probably safe to assume that between them, NASA and the four other national agencies that had a hand in creation of the space station will have the relay back up and running before long. How did this happen, though? I wonder how it must feel to be up there, in that giant tin, without direct communications with home. Is it a beautiful kind of loneliness, or more of a frightening one? Maybe none of us will ever know. But hey – at least we’re safe from orbital Barenaked Ladies jam sessions for the time being.

Update: After a few hours down, communications between the ISS and NASA have now been restored. It turns out the culprit behind the malfunction was a software update; congratulations to everyone who had that joke brewing in their head.