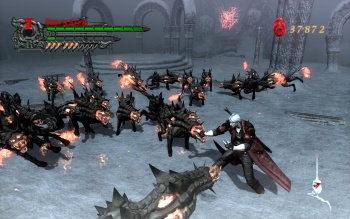 Ninja Theory is announcing a new game at the Tokyo Game Show this week, with rumors pointing toward a new title in the Devil May Cry series.

Heavenly Sword developer Ninja Theory is known to be working on Enslaved for its October release, but the company also has another project it’ll announce this week at the Tokyo Game Show. There isn’t any definitive proof as to what it’ll be, but most (ninja) theories are leading people to believe that a fifth Devil May Cry game is on order.

With a recent tweet, Ninja Theory wrote: “The new Ninja Theory game will be announced at Tokyo Game Show this week.” This constitutes one of the only facts in this theory. Back in April, a rumor in Game Informer magazine stated that Ninja Theory was being “tapped” for the next Devil May Cry, but that isn’t the only indication making a DMC reveal likely.

Ninja Theory once called its upcoming game an “unannounced game for an unannounced publisher,” and wouldn’t confirm or deny involvement with the DMC franchise when asked. Capcom has said that its established IPs were likely to be handed to foreign developers, and that the next Devil May Cry game will have a more “western” feel to it, implying that a developer outside of Japan would take over, such as the UK-based Ninja Theory. Ninja Theory is known for third-person action games, a genre of which Devil May Cry is a member.

Siliconera also recently noticed a Capcom trademark for “DMC,” which is no doubt for a Devil May Cry-inspired title that could be a reboot. Capcom will be announcing four new titles at the upcoming Tokyo Game Show, which runs from September 16-19, and it wouldn’t be a surprise to see Devil May Cry amongst its ranks with Devil May Cry 4 released more than two years ago in early 2008.

Does any of this mean anything concrete? Nope. “DMC” could be a trademark for a Capcom screensaver pack that features dogs, monkeys, and crochet for all we really know. However, it doesn’t take a genius to connect the dots and see that Devil May Cry 5 or a series reboot is likely to be revealed within the next few days.

Update: It’s true. Capcom just announced DmC, a reboot of the Devil May Cry franchise with a new main character.