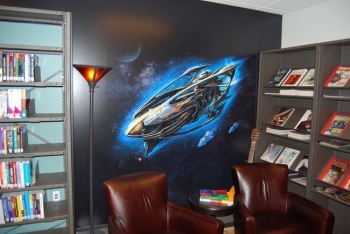 The Irvine, CA campus where the various Blizzard teams work on Warcraft, StarCraft, and Diablo is pretty much Nerd Heaven – and here are more than a hundred photos from behind its gates.

Now I’m actually pretty lucky, myself. I’ve been to Blizzard – twice, no less! – but let’s be honest with ourselves: The company is pretty darn secretive. It’s a shame, too, because both times I’ve been behind those big white gates, I’ve found myself thinking, “Geez, this place is freaking awesome.”

From the doodles on the whiteboards (with nerd references aplenty) and the massive library of books and games, to the museum filled with memorabilia of its various games and the statues of the characters within … Blizzard’s HQ is nerd heaven. Entertainment Web has a compilation of over 100 photographs from around the Internet of what the Blizzard offices look like, and they’re a fun little peek at what goes on behind the doors of a giant PC developer. (So that’s what’s taking them so long to make Diablo III)

Some of the more notable things: the art gallery, the game library, anything written on the whiteboards, and of course the WoW Status Monitor, which shows where people are connecting to the game from all over the world (this was obviously taken during its hiatus in China).

I don’t want to think about what this sort of place costs, but it’s not like there isn’t a healthy revenue stream there. Not that the The Escapist‘s offices aren’t awesome or anything, but if I worked in a place like this, I might never get anything done. And then I would get fired. And I would be sad.

The Broken Economy Is Your Fault