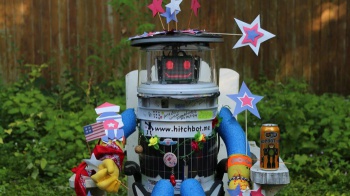 Hitchbot, which was designed to test whether robots could trust humans, met an abrupt end to its journey across the continental United States after just two weeks thanks to vandals.

In July of 2014, a noodle-armed, bucket-headed bot named Hitchbot began its journey across Canada. Its goal: to get from Halifax, Nova Scotia, to Victoria, British Columbia – a journey of over 10,000 kilometres, or about 6300 miles. A difficult journey for an immobile hunk of machinery, to be sure, but the robot (and its Canadian creator) was determined. It was going to hitch.

Its cross-Canada trek was a success; it did the same in Germany some time later. Two weeks ago, it announced the beginning of an American journey that was due to end in San Francisco – unfortunately, Hitchbot has fallen a little short.

“Oh dear, my body was damaged, but I live on with all my friends.” Hitchbot announced on Twitter, after his remains were discovered outside of Philadelphia, likely destroyed by vandals. “Sometimes bad things happen to good robots!”

Ironically, one of the aims of the Hitchbot creators was to see whether a robot could “trust” in the help of humans.

Still – the little bot made it quite a long way before disaster struck. Over the past year, plenty of people have given rides to the adorable droid. Selfies were uploaded with hashtags like, #hitchBOTintheUSA.

Hitchbot communicated with its drivers through Cleverscript speech technology, a program that has attempted to beat the Turing test in the past, as well as “San Francisco or Bust” scrawled on its arms. It loved answering and asking trivia quizzes. It probably wold have loved this hotel.

Its last tweet reads, “my trip must come to an end now, but my love for humans will never fade.” Apparently its previous message, “VENGEANCE AND DEATH TO HUMANS #ROBORALLY” was deleted by moderators.