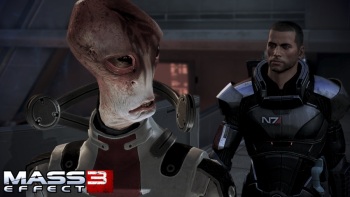 In March, the Florida Family Association launched an email campaign against BioWare and Electronic Arts to protest the inclusion of same-sex relationships in Star Wars: The Old Republic. The Family Research Council made similar noises in January, when FRC President Tony Perkins said “the biggest threat to the empire may be homosexual activists” and called on his audience to speak out against them.

It appears that followers of these “family values” groups have heard and obeyed, as Electronic Arts confirmed that it has received “several thousand” letters complaining about the presence of same-sex relationships in games like The Old Republic and Mass Effect 3, and threatening to boycott its games if they’re not removed. Not that it really matters, as Vice President of Corporate Communications Jeff Brown said the company has no plans to change or censor anything.

“Every one of EA’s games includes ESRB content descriptors so it’s hard to believe anyone is surprised by the content,” Brown told GamesIndustry. “This isn’t about protecting children, it’s about political harassment.”

Brown also dismissed the suggestion that EA was somehow pressured into including LGBT characters in its games, although he acknowledged that a number of forum posts criticizing the company’s stance have been deleted for violating its content rules. “We have met with LBGT groups and sponsored industry forums to discuss content and harassment of players in online forums,” he added. “In short, we do put options for same-sex relationships in our games; we don’t tolerate hate speech on our forums.”

Same-sex relationships aren’t actually available yet in Star Wars: The Old Republic but BioWare and EA have said the option will be added at some point in the future.