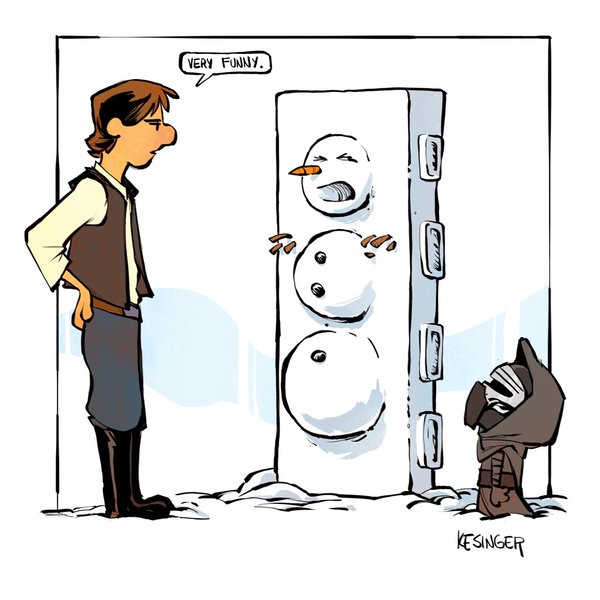 Kylo Ren is a petulant little boy who just wants to have fun and let his imagination run wild. At least that’s what we get when artist Brian Kesinger melds Star Wars: The Force Awakens with the Calvin and Hobbes style.

Kesinger, who has done work for Disney Animation and Marvel Comics, has quite a portfolio of art and mashups, from Star Wars and Winnie the Pooh, to Guardians of the Galaxy meets Disney. All are fun to look at, but seeing Kylo Ren as Calvin really seems to fit.

“I was initially inspired by the scene where Rey sleds down the dune of Jakku, but as I continued to draw them I found a lot of similarities between Kylo and Calvin,” Kesinger told us. “The relationship between him and his parents is a great source of humor.”

Kesinger said that the fans have really responded to the art as well. “Both Star Wars and Calvin and Hobbes are nostalgic for a lot of people, myself included. I think that is why the blending of the two properties really resonates.”

Check out the gallery and let us know what you think, then be sure to head on over to Kesinger’s Instagram page to peruse his other work.

Thousands of Games on Sale For Steam Lunar Sale

Preserved Peckers, DOOMed Games and the Ghost of Trademarks Past