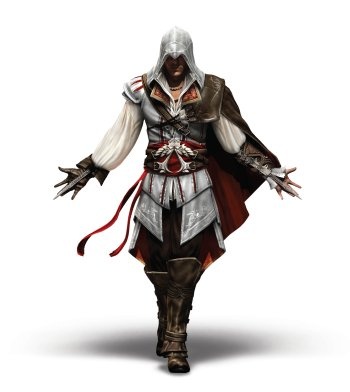 So long, Altair. Renaissance man Ezio Auditore de Firenze is the new star of Assassin’s Creed, and he can swim, fly, and, thankfully, doesn’t need to do pickpocketing or eavesdropping missions.

No more looking at the Assassin’s Creed 2 teaser site upside down and sideways in the mirror, folks. Somebody who’s friendly with Screw Attack has apparently gotten a hold of the newest issue of Game Informer, and they’ve spilled the beans on the sundry AC2 details within.

Let’s start with the star of the show. Altair and his crusading ways are gone, replaced by a Florentine fellow by the name of Ezio Auditore de Firenze who, according to Game Informer, lost his family thanks to an old-fashioned Renaissance-style rivalry between two clans.

Maybe he’s out for revenge, or maybe he just likes to kill people. In any case, he’s got quite the arsenal to do the job: mechanized wrist blades (as seen in the teaser), as well as an axe, hammer, mace, spear, swords, a “spear axe” and some “smaller blades.” Each weapon has a “special move,” and if you get tired of using your own gear, you can disarm enemies and take their implements, which is neat.

Ezio’s also much more mobile (and dandishly dressed as you can tell from the art to the right) than Altair: he can swim and also glide, using the presumably Da Vinci-designed glider we saw in the teaser. Horse-riding and tower-climbing (and hopefully tower diving) return in the game.

What don’t return are a number of annoyances from the first game, most thankfully the omission of the pickpocketing and eavesdropping missions that precluded the actual assassinating and dragged down the gameplay for many folks. Missions themselves will also be getting a shot of variety as they’ll come in 16 different types.

As rumored before, the game takes place in Venice, though it’ll likely move beyond the confines of the city to other locales, with “the countryside of Tuscany” already confirmed. And since this is 1476 Venice after all, the all stars of the Renaissance are in full force here and seem to play major roles in the game: Niccolo Machiavelli, Lorenzo de Medici, and, very likely Leonardo, though the information only makes mention of his workshop being in the game.

Sounds pretty good to me, but I’m one of those weirdos who enjoyed the first one with few qualms. My only concern so far is the new character design. A bit too, uh, flowery? I guess he is Italian, though.