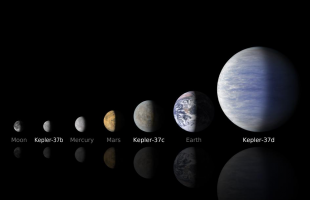 As the search for Earth-like planets continues, astronomers using NASA’s Kepler Spacecraft data have found two bodies that could be the most similar to our own world yet.

Kepler-438b and Kepler-442b are the official designations, and the planets both appear to check necessary boxes on the “could they support human life,” list (even if they are both several hundred light years away). For starters, 438b and 442b both orbit their stars within the liquid water window — not too close, and not too far away. Liquid water isn’t guaranteed on these planets, but their respective orbital paths mean it’s a possibility. Furthermore, they both receive an appropriate amount of sunlight from their respective stars, both of which are dimmer than our own sun.

When looking for planets that could support human life, “close enough,” is the name of the game. Less sunlight isn’t a dealbreakr, so long as the atmosphere is conducive, and there’s water to drink.

Five other, smaller planets were also discovered, but data on them is not immediately available. The findings, which were initially presented at a meeting of the American Astronomical Society in Seattle, will be made public in their entirety in The Astrophysical Journal later this year.

The two possible Earth-like planets are exciting news, for sure, but it’s only a drop in the bucket. NASA’s archive of uncatalogued planetary data from the Kepler spacecraft now numbers over 4,000, meaning there’s a lot of data to chew through still.

In other Kepler news, NASA’s Jet Propulsion Laboratory has been having a bit of fun with a few of the more popular confirmed exoplanets. Three tourism posters were commissioned last month, highlighting planets HD 40307g, Kepler-186f, and Kepler-16b. Discovered in 2011, Kepler-16b is a planet roughly the size of Saturn, while 2014’s Kepler-186f is roughly the same size as Earth. HD 40307g is a habitable zone exoplanet that’s relatively close to Earth, at 42 light years away.

Click through on the mini gallery below for larger images. The originals can be found here.

Tobias Buckell Has First-Hand Experience in Telling a War Story

This Is Why Your New Year’s Resolution Will Fail