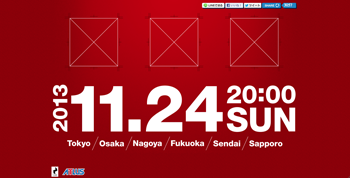 A new teaser site opened with the familiar P-Studio logo for Atlus’ Persona team, and it can’t be for the Persona 4 Arena update.

Despite all the hype, Atlus has kept quiet about a new Persona game since Persona 4‘s release in 2008. Today the company opened a teaser site at p-ch.jp, hinting at a reveal on Nov. 24 at 8 p.m. At the bottom of the site is the logo for Atlus’ Persona team, which can be seen on their other Persona games, most recently Persona 4: Golden and Persona 4 Arena. The site’s red background also shows three empty boxes at the top of the page. Would it be wrong to hope for a Persona 5 teaser?

Atlus also confirmed the latest update to Persona 4 Arena: Persona 4 The Ultimax Ultra Suplex Hold in Famitsu. The new teaser site likely is not for the update, as it already has its own website. Two characters from Persona 3 will be joining their other cast members in the update to P4A. Yukari Takeba continues to use her bow and arrow, and she’s become an actress in the fictional show Phoenix Ranger Featherman R. Junpei Iori has become a baseball player, and he uses his powerful, wild swings from P3 to fight opponents with his bat.

The trailer also shows a completely new character to the universe. Sho Minazuki wears the Yasogami High School uniform around his waist, making him a classmate of the P4 characters, but his impact in the game is unknown.

Ken Levine: SteamOS “Is Going To Be Awesome”

TotalBiscuit is Speaking at Escapist Expo 2013!