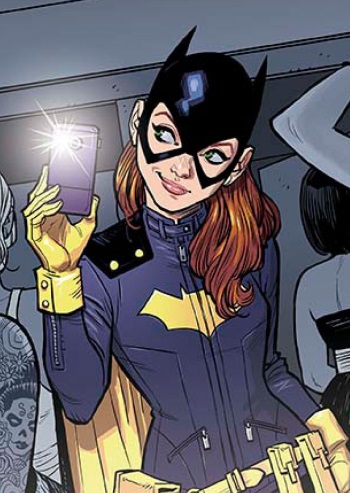 Newcomer artist Babs Tarr and writers Cameron Stewart and Brenden Fletcher will take over the series in October after Gail Simone’s departure.

With Gail Simone leaving Batgirl for a yet-unannounced project with DC Comics, Barbara Gordon is getting a brand new creative team. MTV News revealed the new team today, along with a first look at Batgirl’s new costume. Writers Cameron Stewart and Brenden Fletcher will write the ongoing series beginning with issue #35, set to release October 8. This is the first collaboration between Stewart and Fletcher, whose previous work with DC includes Batman, Inc. and Wednesday Comics, respectively. Newcomer artist Babs Tarr rounds out the creative team.

“Being approached to do Batgirl and being met with such open arms toward my art style and ideas has just been beyond my wildest imagination,” says Tarr. “Batgirl will be my first comic, and I could not be more honored and excited about the challenge!” Stewart, who also works as an artist, worked with Tarr to redesign the Batgirl costume. The new costume emphasizes practical crime fighting, replacing Batgirl’s classic spandex look with a leather jacket and removable cape.

In the first issue from the new creative team, a fire leaves Barbara looking to replace everything she owns, including her costume. Barbara assembles the new costume herself, recycling and modifying clothing from thrift stores and boutiques. “It also reflects her youth and style,” says Stewart. “Unlike Batman or Batwoman, she no longer needs to stay in the shadows, and in fact learns to embrace the spotlight.” Barbara also gets a change of scenery, moving away from the core of Gotham. “Just prior to the start of our story she’s pushed to the breaking point and decides that she’s had it with misery and darkness and wants a change,” says Stewart. “She wants the opportunity to have some fun and live the life of a young, single girl in the city, so she packs up and moves to Burnside, the cool, trendy borough of Gotham, to focus on grad school.” Batgirl will be facing new opponents in Burnside, a change from the classic Gotham rogues gallery. “These stories stand on their own, existing within continuity, of course, but not directly influenced by events in other books,” says Fletcher. “Our first issue is the perfect jumping-on point for new readers.”

Barbara certainly takes a better selfie than Batman. What do you think of the redesigned costume? It looks downright comfortable. I can hear the quickened heartbeats of cosplayers everywhere.