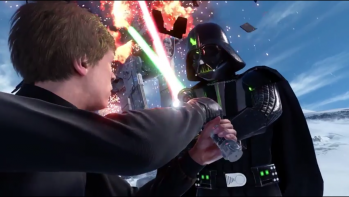 Something a lot of us already suspected: Star Wars Battlefront was rushed out the door to meet The Force Awaken‘s release date.

So most of us agree that Star Wars Battlefront was kind of bare-bones – especially with its distinct lack of any sort of singleplayer campaign. Well today publisher EA games has confirmed something we all sort of suspected: the game originally did have a campaign mode planned, but it was scrapped so they could get the game out the door in time for The Force Awakens theatrical release.

“We made [the choice] due to time and being able to launch the game side-by-side with the movie that came out to get the strongest possible impact,” Patrick Soderlund, EA Studios boss, explained in an investor broadcast.

Soderlund’s confirmation certainly explains a lot, and it really makes you wonder just how much more of the game was cut in order for it to make launch with the movie.

Battlefront is currently sitting on a 75 rating at Metacritic, something Soderlund hopes to remedy with the game’s impending sequel.

“I think the team created a really good game based on the premise that we had. I would say the game has done very well for us and reached a very different demographic than a traditional EA game.

“So from that perspective, it’s a success. Are we happy with the 75 rating? No. Is that something we’re going to cure going forward? Absolutely.”

Unless, of course, Battlefront 2 has features cut in order to release with Episode VIII…