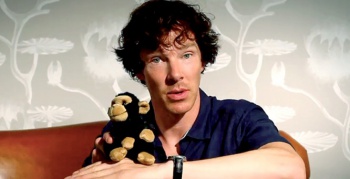 Those hoping for Sherlock lead actor Benedict Cumberbatch to make an appearance in either Dr. Who or Star Wars: Episode VII might not like what they’re about to read. During the Oz Comic-Con on Saturday, Cumberbatch squashed any hopes — and rumors — of him appearing in Dr. Who, and states, “I’m never gonna play the Doctor – and nothing to do with the Whoniverse.” With Sherlock co-creator Steven Moffat also being the showrunner for the BBC’s Dr. Who TV series, fans have speculated — and hoped — that Cumberbatch would one day play the Doctor himself due to the connection. Unfortunately, as Cumberbatch’s statement confirms, that won’t happen anytime soon.

If that wasn’t bad enough, while Cumberbatch had a very big role in J.J. Abrams’ Star Trek: Into Darkness, the British actor also confirmed he won’t be making an appearance in Abrams’ Star Wars: Episode VII. According to Australian site The Iris, who was live-tweeting from the Oz Comic-Con, Cumberbatch revealed, “I would’ve liked a part in JJ’s new Star Wars but it won’t happen, sadly.”

There you go, Cumberbatch fans. Don’t expect Sherlock Holmes to make an appearance in either sci-fi franchises, but at least you’ll be able to hear him once more as Smaug later this year in The Hobbit: There and Back Again And who knows? Things might change, as is the case with actors and casting choices.